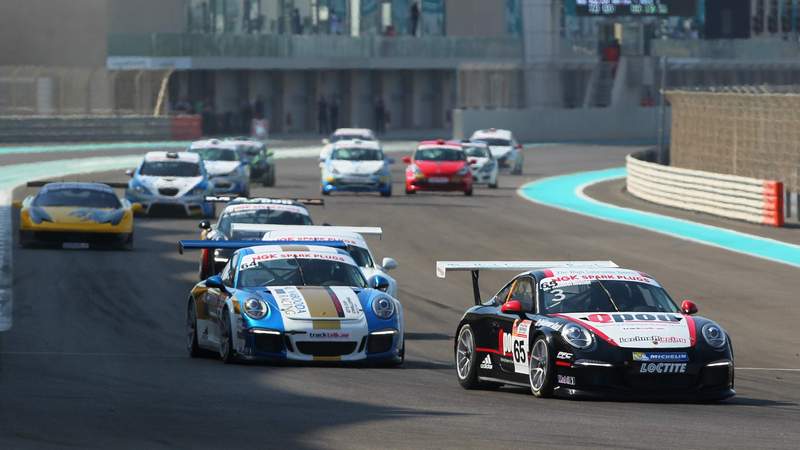 Start of the NGK Racing Series at Yas Marina

Abu Dhabi – Fri, Oct 18th 2013 – The opening round of the 2013-2104 NGK Racing Series took place at Yas Marina Circuit, featuring two hard fought races on the day and setting the scene for what is sure to be an intriguing season ahead.

Michael Ammermuller starred as he powered to overall victory in both races, at the wheel of the Lechner Racing Academy ME Porsche GT3 Cup 991 and setting the fastest lap of the day in the process. He was chased hard all day by Clemens Schmid who was runner-up on both occasions, with Zaid Ahkannani third.

Reigning NGK Racing Series Class 1 champion Costas Papantonis at the wheel of the Gulf Petrochem SEAT powered to victory in both races unchallenged. His expected rival Brian McGinley, in the Phoenix Motorsport Opel Astra, failed to make it on to the grid. In Class 2 Alexandros Annivas (Gulf Petrochem Renault Clio) and Rupesh Channake (Lap57 Honda) shared a win apiece. Annivas qualified on pole and made the most of his early pace in race one to take the win. Channake recovered from brake cooling issues in the first race to snatch victory in race two.

In the UAE Clio Cup – race within a race – it was Annivas who took top honours in both races ahead of Gulf Petrochem teammate and brother Konstantinos Annivas in second place and Jonathan Mullan third. Class 1 double winner Costas Papantonis in the Gulf Petrochem SEAT: “We had no problem throughout the weekend. Everything went fine. A good day for our team with six podiums on the day which I dedicate to our sponsors Gulf Petrochem who have stood by us and backed us for the past two years. We want to bring home all the titles this year in their honour.”

Class 2, Race 2 winner Rupesh Channake in the Lap57 Honda: “We had some issues on the day with the car which hampered me in the first race but was happy to get it on the podium. We had some brake cooling issues which we worked on to resolve between the races. This gave me the edge I needed, and the reward was a victory in the second race. Now the plan is to keep the momentum going and we are targeting the title again.”

Class 2, Race 1 winner and double winner in the UAE Clio Cup Alex Annivas in the Gulf Petrochem Renault Clio: “There was very little to separate the Clios in qualifying, but in the race it was different. I put my head down, ignored the mirrors and did everything to make a gap which I did. The first race was okay, I had some pressure from Rupesh [Channake]. In the second race a I got a very good start and managed to hold on to the lead for a two or three laps. But Rupesh found pace and was too quick on the straights. So I decided to consolidate and save the car, it’s still early in the season. So a win and second place in Class 2, plus two wins in the UAE Clio Cup is a good way to start the race. I am very happy and dedicate this to my sponsors Gulf Petrochem.”