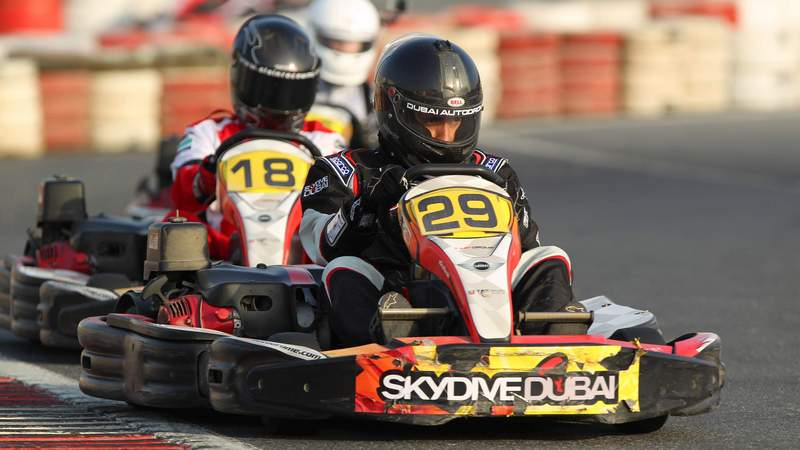 Saturday, Oct 12th, 2013– Sky Dive Dubai Falcons Racing have moved to the top of the rankings in the 2013 Kartdrome Endurance Championship driven by Mini, after powering to a thrilling victory in the Kartdrome 700 Kilometres race, with CG Racing Pro finishing second overall and Team Emirates Racing winning the Corporate category for the first time on Saturday.

A quality field of 32 teams was flagged off on Friday at 21.00 pm on a balmy but relatively cool night in Dubai, on the reverse switchback configuration of the Kartdrome.

Earlier Hussein Umid Ali scorched around to claim a surprise pole position for the Unbeatable Spirits squad, trumping the pre-race favourites in the process.

From the start it was CG Racing Pro who led with Alban Varutti setting the early pace. However a safety car period, brought about when the track needed to be cleared of sand and debris, gave Dubai Falcons a break which they seized to take the lead which they retained until the very end.

With Dubai Falcons in the lead, CG Racing Pro who dropped down a couple of laps during the safety car period began a relentless pursuit throughout the night and into the morning. By sunrise they had worked their way to second and were on the same lap as the leaders, and closing fast. At times the gap was down to a dozen seconds, the tension was palpable and the pressure immense.

But in the end Dubai Falcons crossed the line to win by a mere 20.577 seconds with 562 laps on their board and twelve hours of racing. CG Racing Pro, who simply never gave up despite their early misfortune, were second overall with Timeless Events Racing third.

Fastest lap went to CG Racing Pro’s Varutti who set the best time of 1:12.536 in his pursuit of the eventual winners.

The victory gives Dubai Falcons the lead in the overall championship standings with the decisive final round to take place in December also at the Kartdrome.

The battle for top honours in the Corporate was equally fierce, if not more so, as a trio of teams battled throughout the 700 kilometres. Corporate championship leaders CG Racing 1 and CG Racing 2 were always at the sharp end of proceedings, with Team Emirates and Action Racing keen to end their domination of the category.

Emirates were hampered early on, even suffering a penalty, before delivering their best performance in their short two year history as a team, and when the chequered flag waved at 09.00 am on Saturday morning they claimed their first ever win in the Corporate category.

They also finished fourth overall and only 12.039 seconds ahead of their Corporate rivals and second placed Action Racing, with CG Racing 2 and CG Racing 1 third and fourth respectively – the latter claiming the prestigious Nations Cup in the process. Thus ended one of the tightest ever contests seen at the Kartdrome in this category.

Dubai Kartdrome manager Ryan Trutch said afterwards, “This was a really a great race with 32 teams of high quality, and as a result the racing was very tight in both the Pro and Corporate category. Also interesting was the various battles throughout the field. This now sets the scene for what should be a a tremendous championship deciding finale which takes place here at the Kartdrome in December.”

Sheikh Hasher Al Maktoum: “We recovered from a bad start. CG Racing Pro were not very lucky and the safety car might have cost them the race. But as long as we are winning and leading we are very happy. I want to thank our whole team. Everyone had a big role in this win and now we look forward the next one.”

Hadi Al Bloushi (Team Manager): “It was a very tough race and very close until the very end. We worked very smoothly and we had full confidence in our guys. It was a very bad start for us, but then the safety car came out and we were able to polay the game just right. I want to thank everyone in the team. It was a 100% effort from all. In the end we deserved this win. To the rest of the teams I want to say hard luck, but it was very tough and very good racing.”

Mohammed Al Mutawaa: “We did not get a good start. But we were really lucky when the safety car came out, we gained an advantage there. But CG Racing Pro were coming all the time and made it really tough. We had to push all the time with no mistakes. I was worried throughout the last three hours. But we did not stop pushing, even the last ten laps with 20 seconds advantage and all the way to the end. The team did well and Sky Dive Dubai helped us to get here. It feels good to win one of the closest endurance races I have ever had here at the Kartdrome.”

Edward Jones: “We were fortunate during the safety car period. From then on it was all about managing the gap, and they got really close at the end. But we did enough to win and for me it is special to be part of this Sky Dive Dubai team and win with them first time out is great.”

Saeed Al Mehairi: “It was a very tight race with pressure throughout, but we did it and now we lead the championship. I want to thank everyone involved with our team. It was a whole team effort, everyone did their bit towards this victory. Now the target is to win the championship here in December.”

Jiby Kuriakose: “This is really a great win for us. We have been doing karting as a team for a couple of years now and this is our first victory. We are really excited about this achievement. We qualified tenth and in the first couple of hours we had a few incidents, even a penalty. We were down to 12th, but we had a very good overnight stint and by the morning we were targeting P3. We then had a couple of brilliant stints and when the flag came out we were in P1. It feels absolutely brilliant and I want to thank the whole team and of course Emirates.”

Alban Varutti: “We got a really good start, I was flying in the first stint then we had a full course yellow. We came in for a pitstop at this point and I think there was a big mistake with the pit exit. We lost almost three laps because of this and we came back to close that gap to only 20 seconds in the end. That’s racing, and next time we return here to win in December.”