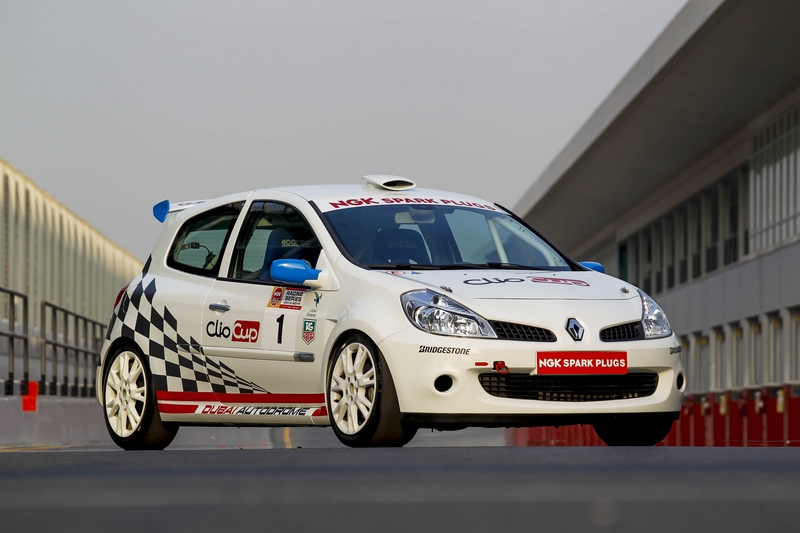 The 2012/13 UAE Touring car Championship (UAETCC ) organized and run by the Dubai Autodrome Motorsports Club (DAMC) produced some great racing. Plenty of thrills and spills on a race weekend were usually the order of the day, no more so than within the ranks of the one make series, that of the Clio Cup.

The Clio Cup Championship was a class within a class nestling under the UAETCC banner. For those that actually witnessed the racing by this group of track warriors could not fail to be impressed by their bumper to bumper, door to door (literally at times) racing. No quarter asked and definitely none given, that said, the racing was mostly very clean and respectful but full of passion and desire to not only take a race day win but, to take the coveted end of season championship title… Dubai Autodrome today launched their new weapon of choice to take the regular track-day warriors one step closer to actual affordable, competitive racing. That weapon is in the shape of their new Renault Sport built Clio Cup cars. These ‘tin top’ racers have been evolving for quite a few years now and have produced some of the closest and most exciting racing seen at circuits around the world. One make racing is not new and the concept is quite simple, put a grid full of identical cars on a grid, add a driver and let the games begin. Everyone is a winner as the racing is close, exciting and for the drivers, a sure fire way to learn their track craft as horsepower is no longer king!

Back to the launch.

The brief was; Turn up, drink fresh coffee, tea or cold drinks, eat some cakes and go drive our new race cars. No problem, I can do that I thought. So, as I sat in the briefing room listening to James Burnett disclose the finer details of the Clio Cup cars they were soon to let us ‘race driver wannabe’ loose in, we were informed (warned politely) that if we spin it or bin it you would be returned to the naughty room and suffer the indignity of a reprimand by the resident track ogre, Fraser Martin! (only joking Fraser).  With this thought firmly in my mind we were led from the briefing room for some familiarization time in the cars. As mentioned by James earlier, the controls were again covered so we knew exactly (ahem!) what we were doing and would hopefully return the cars in the same shape and condition as when we left the pit garage… A hot but happy Ferret after the test drive

Instructions on track would be by our instructor/observer who would be using hand signals. The signals would be clear and concise, go faster, slower, brake, turn were all indicated with one hand in a calm and controlled manner. However, should we suddenly step out of line as the red mist showed up, he would wave his left hand more aggressively followed by some more unfamiliar hand gestures, in the event of both hands waving in front of you, suffice to say, that would be the end of your day!

In the car we were strapped in to the comfortable but bear huggingly tight four point harnesses. The seat was low and the steering wheel high. Not your average daily driving position. Instrumentation was sparse but covered everything you were likely to need. With the sequential gearbox in first gear, the clutch pressed, our instructor hit the ‘noise’ button and the engine chimed into life. The engine at idle is quite rough and clears only as the RPM is increased, plenty of throttle and slip the clutch and away we go. The sequential gearbox lever was right where it needed to be with minimal movement away from the steering wheel to make a gear change.

We exited pit lane and onto the track. The first lap were were told to make it smooth and not to push the car as we were on relatively cold, slick tires. Yup, no treaded tires on these babies, this was the real deal. One lap completed and now time to speed things up a little. Braking markers had been set up on the track to aid us and to make sure we weren’t pushing too hard or trying any ‘late braking’ maneuvers. Turn-in points were also there to help those of us without any race car experience. We were on the tight, twisty and short club circuit layout which was around 2.5km in length. In actual fact, this was the ideal circuit to showcase these little tin tops and highlight just how good the handling and balance is. The steering is very precise, light and also very dependant on good throttle control. Running into a corner too quickly would have you off the throttle and under-steering towards the edge of the track, getting back on the throttle again would now have the tires scrabbling for grip on the dirty part of the circuit. Smooth driver input on both the throttle and steering makes a huge difference to the way the car reacts. The old adage of ‘slow in and fast out’ sure applies with the Clio’s. Brakes were powerful and with plenty of feel and feedback to let you know what the tires were up to. I am told that due to the higher noise levels in the car, intercom systems will shortly be fitted for the driver/instructor benefit during a race day experience. With five or six laps of the track it was time to head back into the pits. My instructor hadn’t needed to shake his hands at me too much, he wasn’t pale when he got out of the car and was still smiling….Just!

Sitting having a coffee and more cakes after the drive I chatted with Autodrome General Manager Richard Birch. His question was a simple one, “how did you enjoy that” I am sure the grin must have been all that was required to answer that question. To be honest, the car did what it said on the tin. It looked and felt like a ‘real’ race car which is exactly what it is. The cars are built with racing in mind, affordable racing, something which I am sure will attract those who do wish to take that step. The low seating position, the heat, the noise all indicate this is what and how a race car should be, a sparse office with the essential requirements. Components that do what they have to do in a race situation, a car that lends itself to positive driver input in order to keep it stable and balanced under the rigors of a race as the 200+BHP engine delivers enough power to keep the driver amused in something that weighs a little over 950kg.

With the likelihood of eight or nine Clio race cars ready to take up the challenge for the forthcoming seasons racing with the DAMC things were already looking good. Now with the introduction of these Cup cars on the Autodrome race car experience fleet, I can only hope that it does give those close to the edge of competition, that little extra push.

On behalf of Circuit Pro Digital, I would like to thank everyone at the Dubai Autodrome for the invite and for the chance to take to the track in the new Clio Cup cars, a great little experience and one I would gladly take up again given the opportunity.