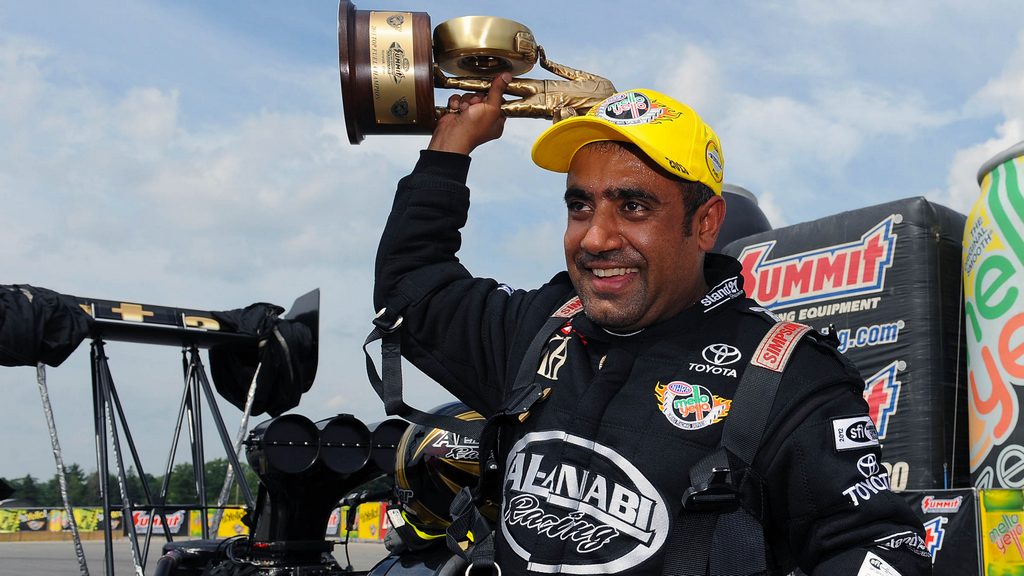 Dubai driver Khalid Al Balooshi celebrates his victory at the 'Summit Racing Equipment' NHRA Nationals in Norwalk, Ohio on Sunday. It was Al Balooshi’s first win of the year and the second Top Fuel win of his career.

Al Balooshi was simply brilliant behind the wheel of the 8,000-horsepower gold Al-Anabi dragster. He beat 2012 World Champion Antron Brown in the opening round and went on to beat Chris Karamesines and Clay Millican to advance to his second final round of the season where he would face No. 1 qualifier Doug Kalitta. Both drivers left the starting line together. The tires on Kalitta’s car lost traction with the race track, and Al Balooshi sped to a big lead before the tires on the Al-Anabi car lost traction. Al Balooshi lifted off the throttle and got back into it but the car went sideways. He lifted off the throttle again and got back into it just in time to beat the quickly-closing Kalitta car in the opposite lane and claim his first win of the season and the second of his career.

“I felt our car was going to do something special this weekend,” alBalooshi said. “Our crew has been doing a very good job, and this is a very good win for our Al-Anabi team. I am happy to win for Sheik Khalid, everybody on the Al-Anabi team, everybody in Qatar and everybody who helps us with our car.

“After we lost here a year ago (12th first-round loss in a row), we were really down – all the luck seemed to be against us, but after we got that first round win the next race (Denver, 2012) everything changed. Things just seemed to come together for us. My crew chief, Jason McCulloch, has done a great job. We had a good car today, and the luck seemed to be with us.”

The Al-Anabi team played host to a young guest this weekend in nine-year-old Jacob Delling a big drag racing fan from Clio, Michigan who has lost sight in both eyes. The Al-Anabi Pro-Mod team befriended Delling at a race in Michigan last week and then went on to victory there. Delling attended the Summit Racing Equipment NHRA Nationals in Norwalk this weekend and had a chance to climb into alBalooshi’s car earlier in the weekend. After alBalooshi won the race, Delling attended the Winner’s Circle celebration where he held and waved the trophy alBalooshi received for winning the race. “Once I saw Jacob in the car, I knew I had to try to do something special this weekend,” alBalooshi added. With the win, alBalooshi remains sixth in the NHRA Mello Yello Top Fuel point standings, but he is just 28 points out of fifth place and just 36 points out of fourth place. AlBalooshi’s win is the third in the last four years for the Al-Anabi Racing Team at Summit Motorsports Park. In addition, alBalooshi claimed the final automatic spot in the Traxxas Nitro Shootout set for September in Indianapolis; it is a special event for race winners in the Top Fuel and Funny Car categories.

On the silver side of the Al-Anabi pit, Shawn Langdon was the No. 5 qualifier; he set the track record for elapsed time with his 3.752-second pass in the first round that defeated J.R. Todd. He went on to beat Bob Vandergriff before losing to Doug Kalitta in the semifinals. With his semifinal appearance, Langdon moves back to first place in the NHRA Mello Yello Top Fuel point standings with a one-point lead over Tony Schumacher. It is the sixth time in as many races that an event has ended with either Langdon or Schumacher in the points lead.

“Today was definitely a great day for the Al-Anabi team with Khalid getting the win,” Langdon said. “It’s always good to get a win for team Al-Anabi, for Sheikh Khalid and everybody in Qatar. Our silver Al-Anabi car was a good-running car all weekend; it was great to get that track record in the first round on Sunday. In the semifinals, we just came out on the wrong end of a great drag race with Doug Kalitta. We got the points lead back from Tony (Schumacher), Khalid won the race so we have both cars in the Traxxas Shootout and Khalid is moving up in points so overall, it was just a great weekend for the Al-Anabi team.”

After a much-needed week off following four-straight weeks of racing, the Al-Anabi Racing team will be back in action July 19-21 at the 34th annual Mopar Mile-High NHRA Nationals in Denver. For additional information, please visit www.nhra.com. For additional information on the Al-Anabi Racing Team, please visit www.alanabiracing.com.