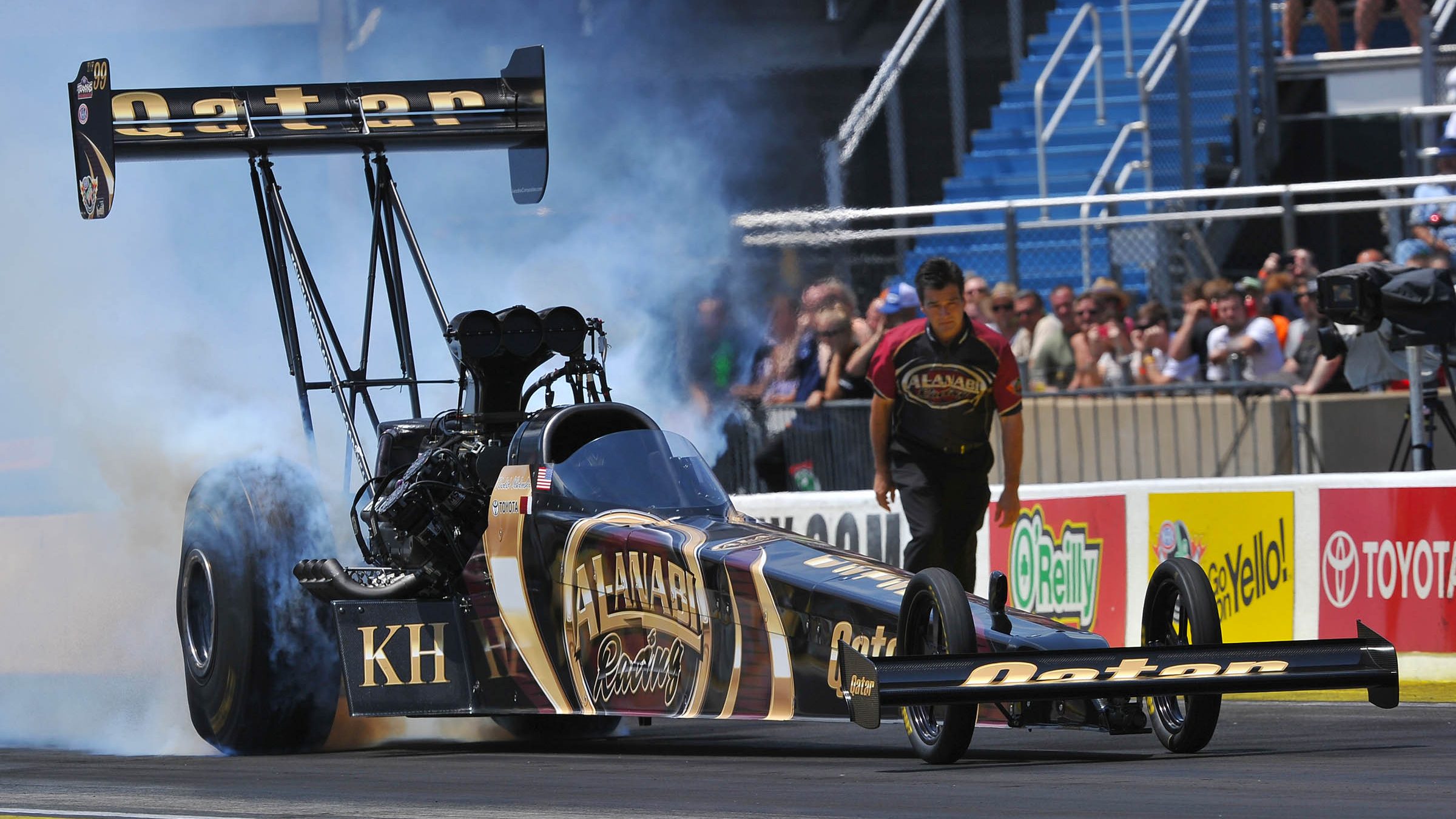 Second-year Top Fuel driver Al Balooshi does a burnout prior to his second-round race at last weekend’s O’Reilly Auto Parts Route 66 NHRA Nationals near Chicago, the race that completed the first half of the NHRA Mello Yello Drag Racing Series season.

This weekend’s seventh annual Summit Racing Equipment NHRA Nationals is the 13th of 24 races making up the United States’ 2013 NHRA Mello Yello Drag Racing Series season, and it begins the second half of the drag racing calendar. Qualifying is Friday and Saturday with eliminations set for Sunday.

The gold Al-Anabi team and driver Khalid alBalooshi have made huge strides since this time last year. At the mid-point of the 2012 season, alBalooshi’s rookie year, the Dubai driver was 13th in the NHRA Mello Yello Top Fuel point standings with 371 points, and he had not yet won a single round of racing during eliminations as he made the very difficult transition from Pro Mod driver to Top Fuel pilot.

Now, at the middle of the 2013 season, alBalooshi is sixth in points with 657 points, an increase of 286 points. He has won 12 elimination rounds, has a second-place finish and two semifinal appearances. Last year, alBalooshi won his 12th round at the season’s 22nd of 23 races.

“I would give our team an ‘A+’  for the first half of the season because of how hard everyone is working and how much better we are,” alBalooshi said. “The changes we have made in our engine and in our clutch do not happen fast. It takes time, and I know that all of the hard work will make our team better. Jason (crew chief Jason McCulloch) and everyone on our crew are doing their best to learn how to run our car with our new engine and clutch setup.

“From the time I started Top Fuel after driving Pro Mod, everything has been different. The biggest thing for me is seat time; seat time is everything. When you get more seat time, things come around easier. Our team goal is for every crew guy, the crew chief and the driver to do the best we can do every time we run the car. There is no need to keep thinking about one thing to do on every run. The goal for our team is to do the best we can do every time. I am excited about the second half of the season.”

The silver Al-Anabi team and driver Shawn Langdon have made similar improvements. At the middle of the 2012 season, Langdon was seventh in points with 616 points. He had one No. 1 qualifier, three semifinal appearances, no final rounds and no wins. At the middle of this season, Langdon is second in points with 936 points, an increase of 320 points. He has three No. 1 qualifiers, one semifinal, six final-round appearances and three wins.

Al-Anabi Racing operates out of multiple locations in both the United States and Qatar. In the United States, the Brownsburg, Ind.-based operation is a two-car NHRA Mello Yello Drag Racing Series team that is managed by Alan Johnson Racing. Sheikh Khalid’s initiative has created increased international awareness of the nation of Qatar while highlighting the nation’s international sports outreach. Alan Johnson is a 14-time NHRA champion in various capacities including crew chief, team owner and team manager. For additional information on the Al-Anabi Racing Team, team manager Alan Johnson or drivers Khalid alBalooshi or Shawn Langdon, please visit www.alanabiracing.com