Posted by CircuitProDigital | May 1, 2013 | Breaking News, Drag racing (all classes) 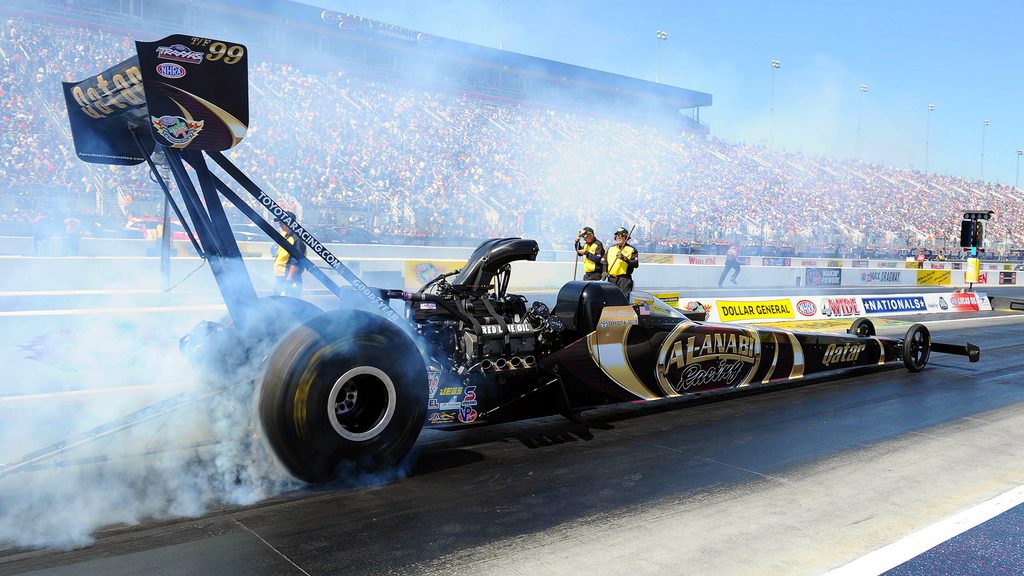 Commerce, Georgia – The hard work is beginning to pay off for Khalid Al Balooshi, the second-year driver for the Qatar Al-Anabi Racing Top Fuel team.

The Dubai native reached the semifinals near Houston, Texas last weekend, and the team continues to improve.  This weekend’s 33rd annual Summit Racing Equipment NHRA Southern Nationals near Atlanta is the seventh of 24 races making up the United States’ 2013 NHRA Mello Yello Drag Racing Series season.  Qualifying is Friday and Saturday with eliminations set for Sunday.

Al Balooshi’s semifinal appearance last weekend was his second of the season, and he is tied for sixth-place in the point standings.  He has now won six rounds of racing in six races this year – it took him 19 races to win that many rounds last year.  In addition, Al Balooshi was the No. 2 qualifier last weekend; it was his career-best qualifying position.  He has qualified in the top six at five of the season’s first six races, and his qualifying position is going in the right direction.  He qualified fifth in Las Vegas, fourth in Charlotte and second last weekend.

“Overall, our team had a good weekend in Houston because we won some rounds,” alBalooshi said.  “Our car and our team are getting better and better, and we are doing the right direction. We go to Atlanta now.  We start a new week there, and I feel good about the Al-Anabi team.  I feel good about the Al-Anabi car, and I feel good that we are getting better as a team.  I appreciate the job our guys and our crew chief are doing for our car, and I thank Sheikh Khalid for being confident in me.  I think in Atlanta we can win more rounds because the car is running better.  It has been going down the track perfectly almost every time. A lot of the cars are going down the track, but our car is going down the track with a fast ET (elapsed time) almost every time.  I am very excited, and I am ready to race again this weekend.”

On the silver side of the Al-Anabi pit, driver Shawn Langdon’s team advanced to the final round of eliminations last week.  Langdon’s final-round appearance was his third in the six races so far this season.  He enters this weekend’s event third in the point standings.

Al-Anabi Racing operates out of multiple locations in both the United States and Qatar.  In the United States, the Brownsburg, Ind.-based operation is a two-car NHRA Mello Yello Drag Racing Series team that is managed by Alan Johnson Racing. Sheikh Khalid’s initiative has created increased international awareness of the nation of Qatar while highlighting the nation’s international sports outreach. Alan Johnson is a 14-time NHRA champion in various capacities including crew chief, team owner and team manager.  For additional information on the Al-Anabi Racing Team, team manager Alan Johnson or drivers Khalid alBalooshi or Shawn Langdon, please visit www.alanabiracing.com.