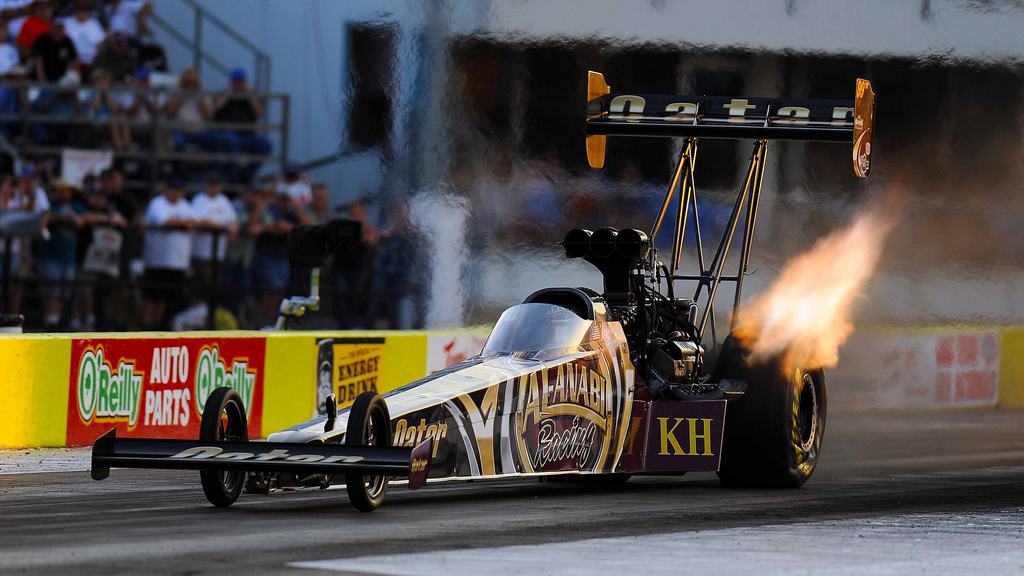 Al Balooshi wins his first round in Pennsylvania in 2012

Dubai driver Khalid alBalooshi returns to the Al-Anabi Racing Top Fuel team following last year’s very successful rookie campaign in which he won a race and finished 11th in the final season standings – very impressive for a driver who spent a career driving Pro Mod and other similar cars before switching to Top Fuel last season. After a slow start, alBalooshi advanced to at least the second round of eliminations at10 of the last 11 races of the season including each of the last nine. He recorded a win and a semifinal in the last three races, and before he lost in the Las Vegas semifinals at the second-to-last race of the year, he had won six consecutive rounds of racing. With all of that success comes great confidence entering the 2013 season.

“Our goal for the new season is to do the best we can do for Sheikh Khalid and our Al-Anabi team,” alBalooshi said. I want to try to win more races this year. Winning the race at Reading (Pennsylvania) last year was special; that race track will always be my favorite, and it will always be a special place for me. But we want to do more; we want to put our team in a better position and make a run for the championship. We hope that both Al-Anabi cars, my car and Shawn’s car, will be in the Countdown (Countdown to the Championship NHRA Playoffs). Everyone needs to watch our team this year; our team will be way better than it was last year. I hope the Al-Anabi team wins a lot of races this year.” Driver Shawn Langdon and crew chief Brian Husen return to lead the silver Al-Anabi Top Fuel team following their impressive fourth-place finish one year ago. During the run to his fourth-place finish, Langdon won the first Top Fuel race of his career. In addition, Langdon claimed five No. 1 qualifiers, more than any other Top Fuel driver, also a career best. During the 2012 season, the Langdon legend of starting-line excellence was clear; he left the starting line before his opponent an astounding 72% of the time, which led the Top Fuel class last season.

Langdon recorded the fastest speed in NHRA history last fall in Reading, Pennsylvania when he reached 334.15 mph. In addition, during the same Reading race weekend, he recorded a 3.712-second elapsed time which is the second-quickest run in NHRA history. Couple those fantastic statistics with brilliant pre-season testing, and you have the recipe for dazzling year ahead.

“The whole Al-Anabi group is really excited to get the season started,” Langdon said. “We have been waiting for this since November, and a lot of the crew guys couldn’t wait to leave for Pomona. Our whole team, from the crew guys, to Sheikh Khalid to Alan to the crew chiefs, we’re all pretty fired up to get out to Pomona and the get the new season started this week. We have high expectations for both cars, and we all want to start the season the right way winning Pomona and then going to Phoenix the next weekend, where we have a good opportunity to get a second early-season victory for our team.

Al-Anabi Racing operates out of multiple locations in both the United States and Qatar. In the United States, the Brownsburg, Ind.-based operation is a two-car NHRA Full Throttle Drag Racing Series team that is managed by Alan Johnson Racing. Sheikh Khalid’s initiative has created increased international awareness of the nation of Qatar while highlighting the nation’s international sports outreach. Alan Johnson is a 14-time NHRA champion in various capacities including crew chief, team owner and team manager.