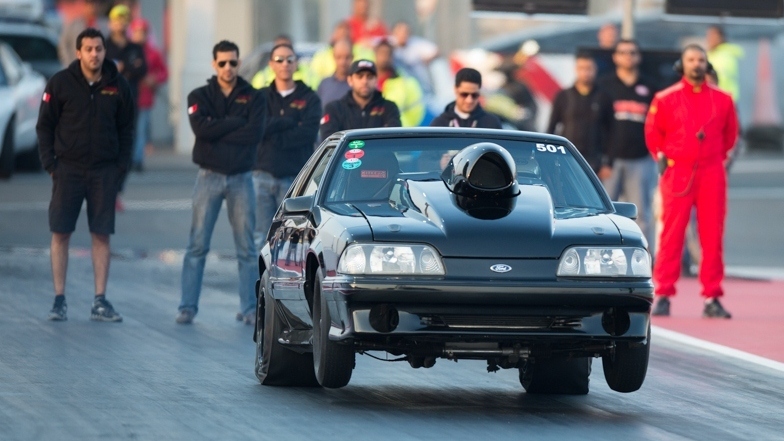 Salahuddin with a winning run of 8.339s in the Street V8 finale

BIC, Sakhir, January 6, 2013-– Khalid Mohammed and Salah Salahuddin were among the big winners in round three of the 2012/2013 Bahrain Drag Racing Championship, held over the weekend at Bahrain International Circuit (BIC) in Sakhir.

Racing in only his second meeting back after a season-long hiatus from the series, Mohammed triumphed in the Pro Mod category while Salahuddin, who was making his own comeback after missing the previous round, took first place in the Street V8 class.

Both drivers were among the nearly 100 participants who were battling it out over 13 classes in the three-day event, which was organised by the Bahrain Drag Racing Club in cooperation with the Bahrain Motor Federation and BIC.

“Everything went well this weekend and we got another good win for me and the team,” said Mohammed, who competes with E Kanoo Racing and who claimed his victory with a steady 16.952s drive in the final.

Mohammed was up against Mohammed Salama, who had a 17.714s finishing time. Salama, himself, had a fine performance as the runner-up. It was his maiden participation in the Pro Mod division, but he still managed to exceed all expectations.

“I’m really pleased to finish second; this is my first time to race in the Pro Mod with our team’s Pontiac Firebird, and already we set a new best time for the car,” said Salama, who is a member of Zain Drag Racing Team.

“We have run consistently the entire round. Tonight we had some good track grip and the weather was very nice, so we had a pretty good finish to the weekend. Hopefully, we can continue to improve and achieve greater things in our future races.”

Meanwhile, Salahuddin made a triumphant return to the championship with a winning run of 8.339s in the Street V8 finale. Salahuddin defeated Wajdey Tarseen for the top position, and later expressed his delight with his strong performance. Tarseen had a solid challenge of 8.906s in the finale.

“Everything was where it should be and it’s been a very good weekend for us,” said Salahuddin. “We ran a thousandth of a second from matching our record in this car, so to win the way we did is great.

“This category is always very competitive but my team is always there to get the job done.”

Claiming a surprise victory in round three was Yousif Alzayani in the Outlaw Rear-Wheel-Drive (RWD) class. Alzayani managed to beat World Record-holder Ebrahim Kanoo in the decisive head-to-head when Kanoo was experiencing car problems.

Alzayani clocked a mark of 8.594s down the quarter-mile to claim his win.

“I am very happy and I hope I can keep on winning in the next rounds,” Alzayani commented.

Elsewhere in the cars classes, Akram Khalil won the Street Front-Wheel-Drive (FWD)/RWD with a 10.847s showing in the final. He defeated Hussain Abdulla who had a time of 11.453s.

Bader Dashti clinched first place in the Super Street Outlaw FWD. He clocked a winning mark of 9.515s, beating Mohammed Mubarak who faced car problems and had a 23.367s time.

In the Super Street RWD division, Yousif Abdulla won in 9.738s. Jassim Zaman was the runner-up with a 15.523s run in the final.

Talal bin Eidan followed suit with a victory in the Super Street V8 class. He won despite a run of just 21.976s, as rival Saad Almuran had a stage foul.

Ali Haji triumphed in the Competition 7.5, narrowly beating Hussain Mohammed in a tightly contested final. Haji had a 7.539s time while Mohammed clocked in at 7.810s.

In the four bikes classes, Billy Voss once again showed his talent with a victory in the Pro Bike division. The American had an impressive mark of 4.091s racing down an eighth-mile, beating Mohammed Yagot.

“I’m happy to be racing here with my team MRB, and we’re really excited with how our season has gone so far,” Voss said. “We’ve put in a lot of time and effort and it’s all paying off.”

Mesfer Mubarak was another winner, taking the top podium spot in the Street Bike class. He had a time of 8.271s to beat Mohammed Burashid’s 9.358s in the final.

The Super Street Bike category was claimed by Mashari Al Turki. He had a winning time of 6.883s going against Yacoub Al Ali in the final race.

Mohammed Al Badah was the night’s last winner. Competing in the Outlaw Bike class, he clocked a time of 6.964 in the decisive head-to-head. Bader Bin Eidan had to settle for second place, finishing the run with a mark of 8.116s.

At the end of the night, all the round’s winners were presented their trophies and cash prizes by Bahrain Drag Racing Club officials in a special podium ceremony.