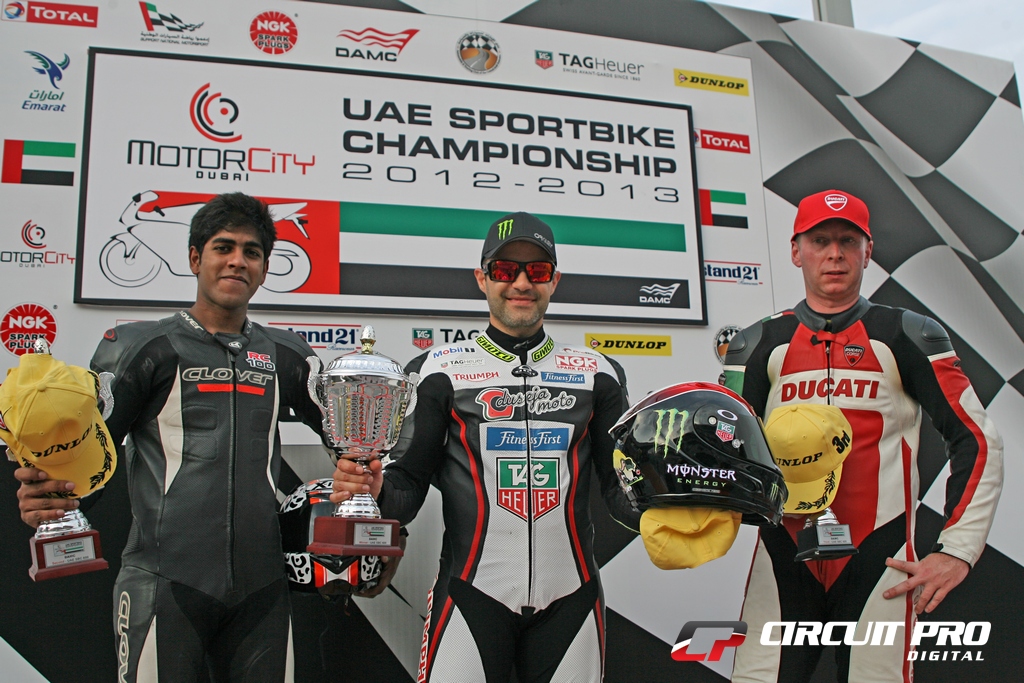 Race 2 Mahmoud Tannir was leading when the race was stopped on lap four and declared the winner, with Raja second Ducati rider Joe Oxley was third

Papantonis was chased all weekend by Keith Wake in the Phoenix Motorsport Opel, but the former champion was too good on both days.

He reflected, “It was a good weekend for us. We had some issues with the car but we sorted that out, so I am very pleased to take the points.”

Rupesh Channake also tasted victory twice on the final day in the NGK Racing Series Class 2 of the festival, which coupled to his win on the opening day made it a trio of victories over the two days.

The real action, and perhaps even the battle-of-the-day, was in the Clio Cup class where it was door-handle-to-door-handle racing between Renault drivers Ramzi Moutran, Alexandros Annivas and Will Morrison, with Honda driver Jonathan Mullan also in the mix.

Moutran, who was runner-up in the Clio Cup race 24 hours earlier, made amends to bag maximum points in Race 2 and Race 3 with Annivas, winner on Thursday, in his slipstream in both races and Morrison looming large in their mirrors as the chequered flag dropped.

Leon Price was untouchable at the wheel of his AUH Motorsport prepared Ferrari in Race 2, but opted to sit out the third and final NGK Racing Series race of the weekend. Vladimir Ivanoff had never raced in the UAE before, but he made his entry on to the local scene in fine fettle as he powered to overall and 1000 Class victory in both Motorcity UAE Sportbikes Championship races on the final day of the festival.

Ivanoff, who hails from Moto 2 on the grand prix scene, won the first race by 9.419 seconds from Patric Muff on a Honda who plies his trade in the highly competitive British Superbikes series.

Best of the locally based riders was Gernot Dobida on a Honda who was third in the first race and runner-up in the shortened second race.

Nasir Hussein Syed crashed out on his Suzuki during lap three of the second race, which caused the race to be stopped prematurely. He was taken to Rashid Hospital as a precautionary measure.

Also a crash victim, albeit in the first race, was pace setter Abdulaziz Binladen on his BMW. The Saudi ace admitting that changing brakes, which were not properly bedded in, before the race was probably the cause of his crash. He was uninjured in the incident, but he was unable to race again on the day.

Surya Raja continued his fine turn of form aboard his Yamaha when he claimed maximum points in the 600 Class in the first race, beating reigning champion Mahmoud Tannir on the Duseja Moto Triumph by 2.729 seconds.

In Race 2 Tannir was leading when the race was stopped on lap four thus declared the winner, with Raja second.

Rookie Cup double winner Colin Hindes enjoyed his first ever wins in his motorcycle racing career, and was awarded the TAG Heuer rider of the day for his effort. Edward Jones was also a double winner during the course of the weekend, as he powered his Radical SR8 to comfortable wins in the Radical Winter Cup and bagging the TAG Heuer driver of the day for his exploits on Friday. Bassam Kronfli was second.

The pairing of Tarek Elgammal and Hassan Dargahi were double victors in the Radical SR3 category.

Clemens Schmid in the Al Nabooda entry fought off a concerted challenge by Abdulaziz Al Faisal in the Saudi Falcons car to take his second Porsche GT3 Cup Challenge victory of the weekend. Karim Al Azhari, in the second Al Nabooda backed car, was third.