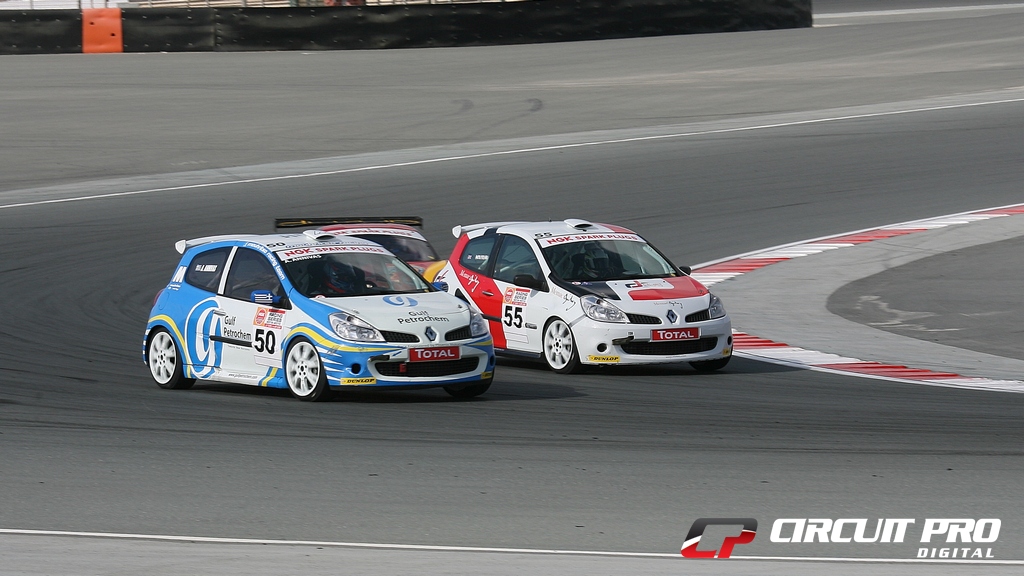 13 December 2012-Report: Day 1 – A small but quality grid lined up for the first of two NGK Racing Series races taking place on the opening day of the Dubai Motorsport Festival weekend at Dubai Autodrome.

Costas Papantonis in the Gulf Petrochem SEAT powered to victory in Class 1 after an early challenge from Keith Wake, who was making a welcome return to the category at the wheel of the Phoenix Racing Opel.

There was little to separate the pair as they circulated bumper to bumper around the Grand Prix configuration of Dubai Autodrome. They crossed the line a mere 0.567 seconds apart with Annivas scoring a narrow victory over Moutran. Rookie driver Will Morrison was not far off the Clio Cup pace and finished third by less than a second, thus setting the scene for what is sure to be an intriguing second race tomorrow (Friday).

Leon Price did duty in the cockpit of the AUH Motorsport prepared Dragon Racing Ferrari in the GT Class, heading the field across the finish line by a comfortable margin. The Motorcity UAE Sportbikes Championship riders were itching to get out for qualifying, as their last round was cancelled due to rain. Taking pole position and topping the time sheets in the 1000 Class was Abdul Aziz Binladen on the Saudi Falcons BMW followed by British Superbike regular Patric Muff on a Honda.

Reigning champion Mahmoud Tannir on the Duseja Moto Triumph Daytona, keen to bounce back from his disappointment on the opening day of the season, signaled his intent by taking pole in the 600 Class. Chasing the champion hard and merely 0.148 seconds off the top time was Joe Oxley on a Ducati, with Omar Naji third quickest on a Kawasaki.

Surya Raja, last year’s Rookie Cup champion and winner of the first two rounds on the opening day of the season, was fourth best in the 600 Class and will have his work cut out to maintain his championship points lead.

Both races for the Motorcity UAE Sportbikes will take place tomorrow (Friday). Dubai based teenager Edward Jones stumped the Radical Winter Cup regulars with a fine drive to take top honours in the Radical SR8 Class, ahead of Bassam Kronfli who was second and the pairing of Jordan Grogor and Abdul Rahman Al Thani taking third.

Hassan Dargahi and Tarek Elgammal shared a car to victory in the Radical SR3 Class, with second place going to Second going to Mohammed Jawa and Aschkan Abdul-Malek finishing third.

Clemens Schmid powered to victory in the first of two Porsche GT3 Cup Challenge races of the weekend in the Al Nabooda entry. He was followed over the line in second by Prince Abdulaziz Al Fasial in the Saudi Falcons car. It was disappointment for Dubai’s Karim Al Azhari who was demoted from third at the finish to seventh after he was adjudged to have jumped the start. His misfortune promoted Bahraini ace Raed Raffi to third place and a final podium spot. The final day of the Dubai Motorsport Festival takes place (Friday 14th) with practice and warm-up starting at 09:00 am followed by the first race at 10:55 am. Entry for race fans is free with access to the grandstand and paddock area throughout the day.