UAE: Torrential rain brings fortune for some and cancellation of Superstock bike races at Dubai Autodrome 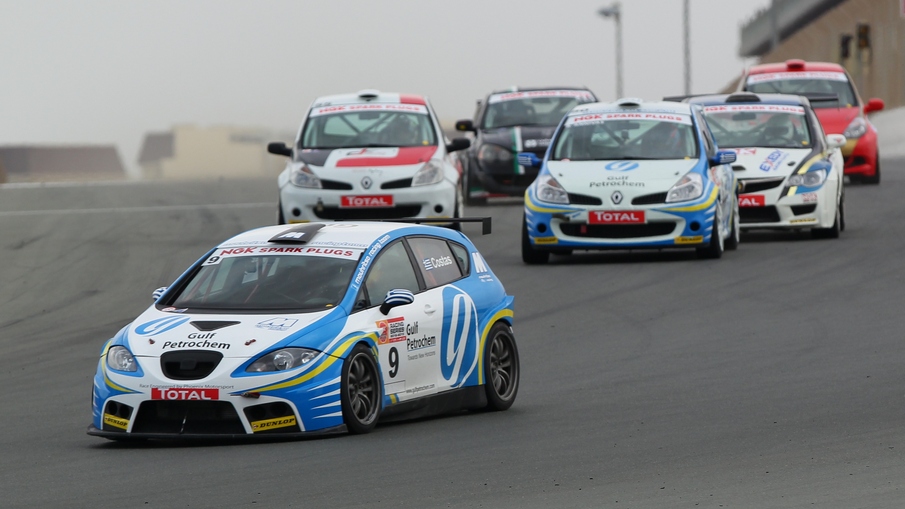 30 November 2012– The rain that engulfed most of the UAE on Friday (30 November) which coincided with the running of UAE National Race Day 2 at Dubai Autodrome, and had a major impact on the day’s proceedings. In the morning conditions were such that it was decided to cancel the running of the two Motorcity UAE Sportbikes Championship races scheduled for the day, as suitable rain tyres were not available for the two wheel brigade, while the NGK Racing Series and Radical Winter Cup races took place under rain darkened skies.

Birthday ‘boy’ Costas Papantonis had double reason to celebrate as he and his son Alexandros Annivas locked out the front row for the NGK Racing Series race in their Gulf Petrochem backed cars and by the time the chequered flag fell both were celebrating victories in their respective classes.

Papantonis taking top honours in Class 1 at the wheel of his SEAT and Annivas, in his Renault Clio, bagging maximum points in the Clio Cup class ahead of Ramzi Moutran, in second, and Will Morrison finishing third.

Rupesh Channake was second overall, and Class 2 winner in the cockpit of the Lap 57 Honda.

Papantonis said, “After some problems in our opening weekend of the championship at Yas it was good to come here to Dubai Autodrome and have the kind of pace which allowed us to win. It is also special to start a race with my son next to me on the grid.”

Annivas, who also had a wayward opening race of the season, was satisfied with his performance, “We sorted out the car and as a result I was able to maximise things and take the win. It is a shame we only had one race, but it is also great to have rain in Dubai.”

The second NGK Racing Series race of the day was cancelled as rain pelted down late in the afternoon over the Dubai Autodrome, making conditions untenable for racing. Qualifying for the Radical Winter Cup took place in wet conditions with cars on rain tyres, however both races took place during a lull in the rain and in dry conditions, with Jordan Grogor and Abdul Rahman Al Thani powering to overall and SR8 Class victory over Richard Sykes and Charlie Kemp in race one.

In the second race it was Sykes and Kemp who took top spot on the podium, in the SR8 Class, as their main rivals Grogor and Al Thani were sidelined with electrical problems on their car. The Dargahi and Elgammal pairing did the business again in the SR3 Class to claim a double win on the day.

The next round of the UAE national racing series takes place at Dubai Autodrome on the weekend of 13-14 December with races for NGK Racing Series, Motorcity UAE Sportbikes, Formula Gulf 1000, Radical Winter Cup and Porsche GT3 Cup Challenge Middle East.