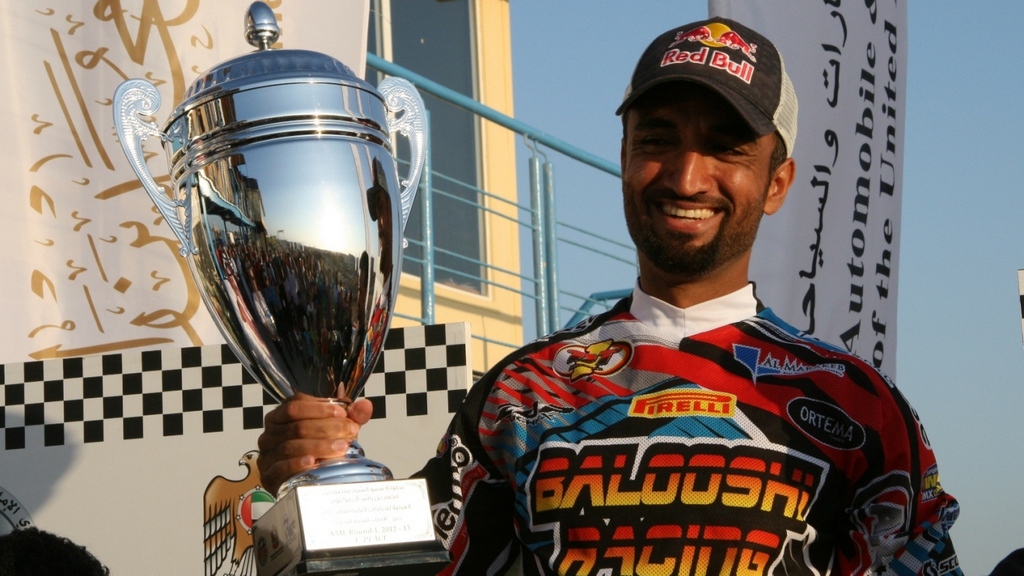 Mohammed Al Balooshi has been crowned champion in the UAE’s inaugural Arab Motocross Championship 2012, bringing a fitting finale to an action packed weekend

Competing in the top tier MX1 category, the Emirati home favourite won both of his two races with ease, clocking 11 laps on the 1,600m track in 21 minutes and 55 seconds in the first race, while easing through his second race in 22 minutes and .06 seconds.

Al Balooshi said: “It’s a really great feeling to win the Arab Motocross Championship on home soil for the first time, and I would like to dedicate this to His Highness Sheikh Mansoor bin Mohammed. His support of this event is crucial to its future success.”

“I have won this championship many times in other countries, but never in the UAE, so to finally win and to be the first Emirati to win here really means a lot. I hope that this encourages more Emiratis to take up this sport.”

Held under the support and patronage of H.H. Sheikh Mansoor bin Mohammed bin Rashid Al Maktoum, the Arab Motocross Championship is organised by the Automobile and Touring Club of the UAE (ATCUAE).

While Al Balooshi underlined his credentials as one of region’s premier moto cross riders, fellow Emirati Mansoor Salem also dominated the pro quad bike category, winning both of his races with times of 14 minutes and 31 seconds in the first race and 16 minutes and 49 seconds in the final race.

Meanwhile, Kuwaiti rider Mohammed Jafar reigned supreme in the MX2 category, with a commanding performance in both race heats, with winning times of 22:31 and 22:33 in Race 1 and 2 respectively.

The Arab Motocross Championship 2012 is the first competitive racing series of the Arab Motorcycle Federation (AMF) following its overhaul in August this year at its Riyadh headquarters in Saudi Arabia – a move driven by the Union of Arab National Olympic Committees to take competitive bike racing in the Middle East to the next level.

Since being restructured, the AMF has been working toward developing a full calendar of motorcycle racing events in the Middle East that run to the international standards laid down by the International Motorcycling Federation (FIM), the sport’s world governing body.