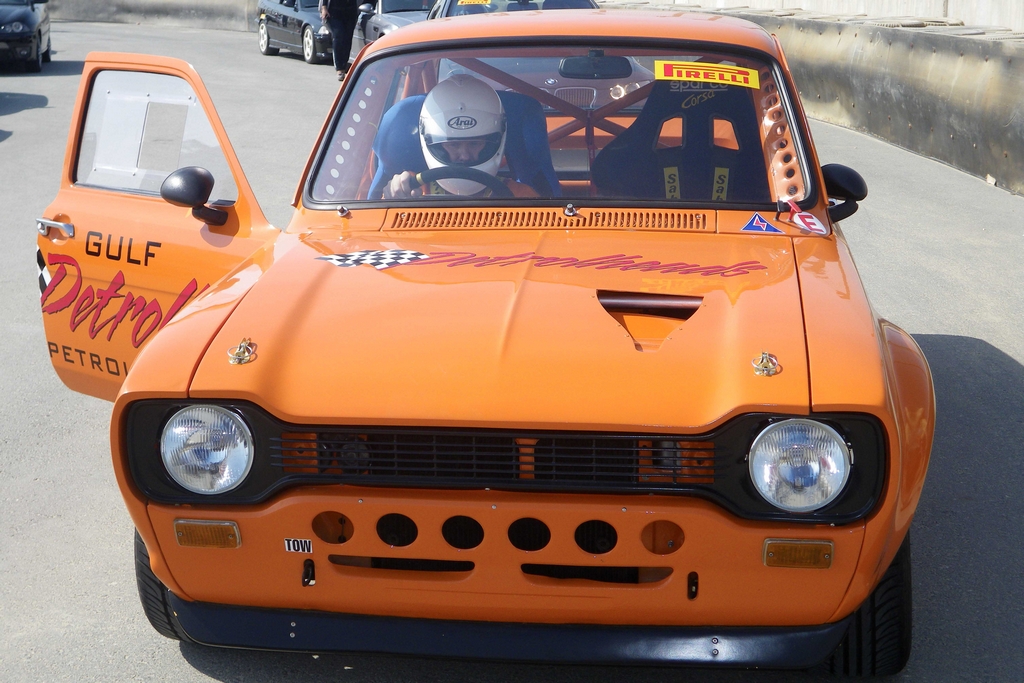 Neil “Biggles” Greer pilots his way to 5th in class at the Evolve run AutoX
at the Dubai Autodrome.

Gulf PetrolHeads head honcho and Emirates A380 pilot Neil “Biggles” Greer entered his Mk1 Ford Escort in the Evolve Club organised and run AutoX event at the Dubai Autodrome on Friday. Most of the cars were modern day road cars so Neil’s Escort certainly stood out and attracted plenty of attention.

The event consists of completing a course that has a handling section (tight twisty turns) and faster track section (held over part of the circuit). Each competitor is timed from a standing start to stopping in the final stop box. As soon as one competitor completes his lap the next competitor starts his. This results in continuous action with no gaps (other than to replace cones that mark out the course) between runs. Cars are split into 3 class, 4 wheel drive, front wheel drive and rear wheel drive.

Neil has recently completed the building of his Mk1 Escort with its new 2 piece prop shaft and saw this event as a means of testing the car to identify any further work which may be required before using the car on future track days.

The event commenced with the usual driver sign on and technical inspection of the car. As Neil had built the car to comply with FIA regulations the car passed the inspection with no issues. The driver (and some team members) got into circuit mini buses with the event organizer before driving 2 laps of the circuit to show the drivers the route they are supposed to take……… 5, 4, 3, 2, 1 and Neil is off. The car bogs slightly at the first tight chicane but soon the car is back on cam and singing like a 2L Duratec engine should. There were plenty of nods in appreciation of the noise by the event attendees. Neil was smooth and controlled through the handling section and as soon he reached the track section it was pedal to the metal time. Approaching the last turn on the circuit Neil was slightly “over optimistic” which resulted in a spin. Still Neil sorted himself out and completed the lap.

Returning to the holding area a quick debrief was held with Neil’s assistant, SVDP Racings Ian Rodgers who was “seconded” for the day. The car felt very skittish and so the tires pressures were reduced to try
and give a larger contact patch and thus more grip. Other than that the car was found to be in good order with no fluids lost.

Neil’s second run was very smooth and with the engine never running nice and cleanly, you could hear the car singing away no matter where it was on the circuit. Despite one Cone v Car interface Neil completed the lap in 1:44 which was 3rd fastest lap in class at the time. Sadly this would be Neil’s last run of the day as he was flying the next day and thus had to prepare for the flight. With that the car was loaded back onto the trailer with thoughts on the work needed to be carried out on the car before the next event.
Neil and Ian wish to congratulate Evolve on the organisation and running of the event and, all being well, they will be back on 16th November at the Dubai Autodrome for the next round….