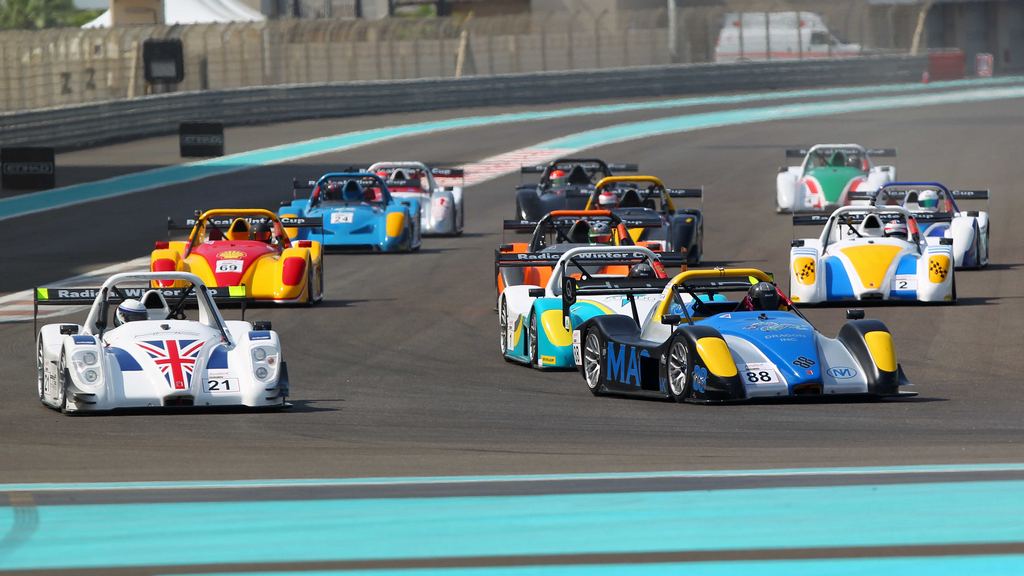 Race winner Bassam Kronfli (88) leads the field into turn one

October 19th, 2012– Dubai based driver Bassam Kronfli made the opening round of the 2012/13 Radical Winter Cup his own after taking two wins from two starts in his SR8 today at Abu Dhabi’s Yas Marina Circuit. Starting from the front row alongside AUH Motorsport’s Abdul Rahman Al-Thani, Kronfli quickly opened up a comfortable lead in race one which extended to six seconds by the time he made his compulsory pitstop.

With no driver change, Kronfli rejoined in seventh place, briefly handing the lead to Briton Charlie Kemp but overhauled the British driver to eventually take the win. Rookie Radical drivers Graeme Hannah and Mark Jordan enjoyed their first outing finishing 11th in race one and ninth in race two while Australia’s Tarek Elgammal enjoyed his return to the category sharing a win with his co-driver Hassan Dargahi in the SR3 class in race one by finishing third outright and second in class in race two when they brought the car home in fifth outright.

“I’m happy to be back racing and considering we were running the spare car today the guys did a really great job to prepare it so quickly,” he said.

After taking race one outright by a comfortable 54 seconds, Kronfli backed it up with a second win and claimed the fastest lap of 2:10.406 in race one.

“Race two was eventful to say the least. We made some changes to the set up after race one which gave it some unusual handling characteristics, so it was dicey at times but we got there,” Kronfli said.

With track temperatures passing 40 degrees, driver fatigue was an issue with some including John Marshall who withdrew from dehydration during the second 45-minute mini-enduro.

Another casualty was Mark van der Snel who withdrew from race one with broken front suspension on the SR3 he was sharing with Sean Stevens.

Kronfli leads the championship taking a maximum haul of 46 points from the SR3 of Elgammal/Dargahi on 27 while Kemp and co-driver Richard Sykes sit in third place on 30 points in their SR8.

Round two is on November 30 at the Dubai Autodrome.