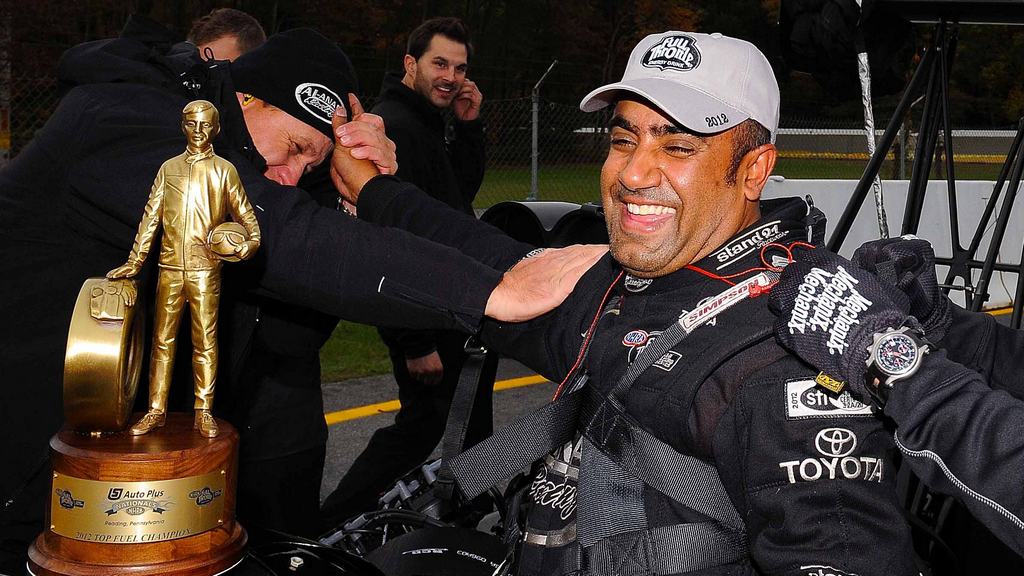 Sun Oct 7th, 2012 – Reading, Pennsylvania – Twenty-two races. That is all it took for a rookie Top Fuel driver from Dubai, UAE to win his first Top Fuel race. He had three Pro Mod Championships and 158 race wins in various classes, but this was the Top Fuel class in NHRA Full Throttle Drag Racing – the top level of drag racing in the world. Many rookies take years to learn how to perform at the highest level, but Khalid Al Balooshi claimed his first Top Fuel win in the gold Al-Anabi Racing Top Fuel dragster in just his 22nd race as a Top Fuel driver. That’s impressive. It began on Sunday when Al Balooshi faced a formidable challenge in the first round of eliminations: Spencer Massey, the No. 2 driver in points and the driver who had beaten Al Balooshi four straight times. Not this time. Al Balooshi ran a brilliant 3.754-second pass – the quickest of his career – to take the first-round win. In the second round, he defeated Ike Maier reaching 328.46 mph – the fastest speed of his career, and it was on to the first Top Fuel semifinal. Then the rains came, and the remainder of the race would have to wait until Monday.

Today, the first pair of cars included silver Al-Anabi driver Shawn Langdon, and if Langdon could defeat Doug Kalitta and move onto the semifinals, he would face Al Balooshi. Langdon won with an incredible 3.712-second pass at 334.12 mph, the quickest AND fastest run in NHRA history at that time, and it was on: the semifinals would include an all Al-Anabi race between Langdon and Al Balooshi.

Al Balooshi ran a dazzling 3.735-second pass at more than 327 mph to take the win over his Al-Anabi teammate and advance to his first Top Fuel final round against points leader Antron Brown. In the final, Al Balooshi was flawless. The rookie driver performed like a true veteran taking out the points leader and winning his first race in Top Fuel. Al Balooshi is the first Middle Eastern driver and only the third driver from outside North America to win a Full Throttle Series race, joining Australian David Grubnic and Kenji Okazaki from Japan. “I have been waiting for this day for a long time,” Al Balooshi said. “This win is good for everyone who works with me, my team owner Sheikh Khalid, my crew chief, Jason McCulloch, my team and (team manager) Alan Johnson. I have tried my best all season; everyone on my team has tried his best all year long, and finally I won my first race. I am very happy this day is here. I know Alan Johnson is happy.

“When I beat Shawn (Langdon) in the semifinals, I was sad for him, but I was happy to be going to the final round. I knew it would be very tough against Antron (Brown), but I thought ‘maybe today is our day.’ And it was. I am very happy for everyone on our team. Chad (Al-Anabi Racing director of racing operations Chad Head) called Sheikh Khalid and brought me the phone at the finish line. I talked to him, and he was very, very happy. I am glad we could win this race for our team, but I am also very happy to win for Sheikh Khalid for all he has done for me and for giving me this opportunity.”

Al Balooshi remains 11th in the NHRA Full Throttle Top Fuel point standings. Since he did not make the Countdown to the Championship NHRA Playoffs, the best he can finish the season is 11th place. He leads 12th-place Clay Millican by 137 points with two races remaining in the season.