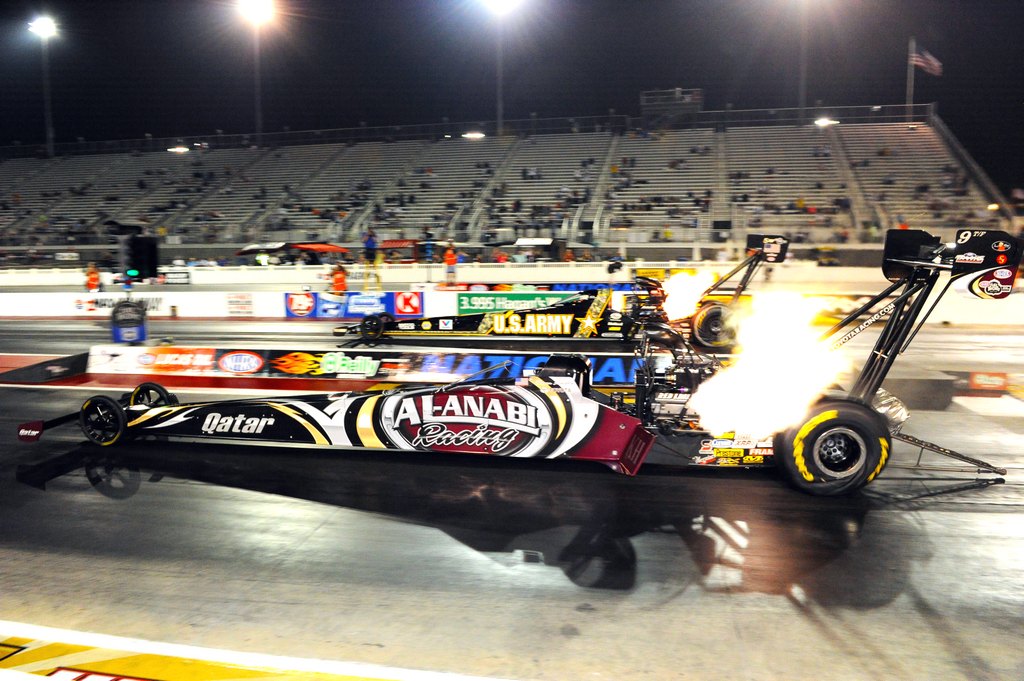 Langdon was the No. 1 qualifier for the second time in as many races. After a four-hour rain delay that caused the race to run late into the night, Langdon charged through four rounds of eliminations like a seasoned veteran rather than a great racer seeking his first Top Fuel victory. He dispatched Chis Karamesines followed by Countdown to the Championship racers Bob Vandergriff and Brandon Bernstein. In the final round, he faced seven-time champion Tony Schumacher running a brilliant 3.785-second pass and beating the seven-time champion by one hundredth of a second to take his first career win.

“I don’t really have the words to explain how great it feels to win this race,” Langdon said. “I just followed the Al-Anabi Team’s lead. (team manager) Alan Johnson knows how to win; (crew chief) Brian Husen and the rest of the team have been here before, and I hadn’t. They know how to get to the winner’s circle, and they proved that today. We have all worked so hard all season long to get this team back in the winner’s circle, and it’s great to win today for Sheikh Khalid and the people of Qatar. Sheikh Khalid told me not to worry and that the wins would come; well tonight, we got him one, and it feels really good.” Langdon entered the Countdown to the Championship NHRA Playoffs as the No. 7 seed. Prior to the start of the playoffs, the points were reset with 10 points between each position. With the points leader’s 20-point bonus, Langdon was 80 points out of first place entering the playoffs. With the win, Langdon and the silver Al-Anabi team moved all the way to third place in the NHRA Full Throttle Top Fuel point standings and are just 19 points out of the points lead with five races remaining in the six-race Countdown to the Championship.

“Being 19 points out of the points lead is perfect; that was our plan,” Langdon said. “We wanted to come in here and make up as many points as we could. We knew we were 80 points back entering the Countdown and that we needed to start making points up at the first race. It’s a good way to start the playoffs; we still have five races to go in the Countdown, but we’re less than one round out of the lead. You couldn’t ask for a better weekend.”

Dubai rookie driver Khalid alBalooshi had another solid weekend qualifying seventh and advancing to the second round of eliminations for the fifth time in the last six races and for the fourth consecutive race. In eliminations, alBalooshi defeated points leader Antron Brown in the first round, but in the second round, the clutch on the Al-Anabi dragster failed to activate causing the team to lose to Spencer Massey.

“The car ran great this weekend,” alBalooshi said. “The Al-Anabi team is doing much better, and we are winning some rounds. It is exciting to see our hard working turning into round wins, but we all want to win more rounds for Sheikh Khalid. If we keep getting better, everything will be OK.”