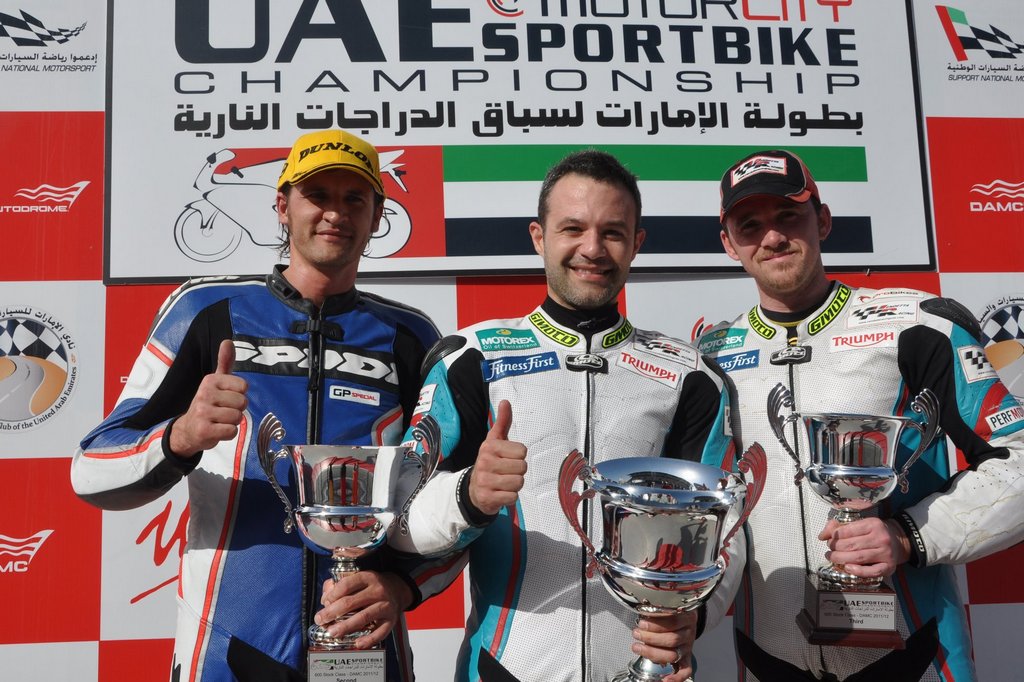 The Motorcity UAE Sportbikes contingent were back in action after a two month hiatus and the day belonged to Mahmoud Tannir on his Vendetta Racing Triumph Daytona 675 who took two well earned victories in the 600 Class. He was pushed hard all day by Erikas Savickas on a Yamaha R6 who had to settle for second place in both races, with Alan Boyter third twice on the other Triumph Daytona.

The win does Tannir’s championship ambitions the world of good as he now has a healthy lead in the standings with a couple of race days left in the season.

Abdulaziz Binladin riding a BMW S1000RR made a return to the local UAE racing scene for the first time this season and was immediately on the pace, taking a pair of wins during the course of the day. The rookie Cup was a tight fought affair with Chris Morley taking maximum points in the first race aboard his Kawasaki ZX6R, with Surya Raja taking top spot in the second race on his Yamaha R6.

Tannir said after his double wins: “It was great to win these two races after more than two months break, really a fantastic day for me. It was tough to get back into the pace, but it all went very well. Of course the championship is on the back of my mind, so maybe I am not taking the risks as I am thinking better to finish and get points than not.”

Rookie Cup race one winner Morley said: “It was a good feeling to win after the last round where I had problems. I have been working out and being coached which has really helped.”

After his two wins in the 1000 Class, Binladin reflected: “I have not raced here this season so far, but it is my home circuit where I grew up so it did not take me long to get up to the pace. My times show that going toEurope and racing there has been very good for me and I am glad that at Dubai Autodrome I managed to get the opportunity, in the first place, to go and race abroad.” Rob Barff and Leon Price shared the AUH Motorsport prepared Ferrari 458 Italia to victory in Round 6 of the GTA Class of the NGK UAE GT Championship by over a minute and a half after starting from their tenth successive pole position.

Rafael Unzurrunzaga gave chase but had to settle for second place overall in the Mosler GT600.

Price said afterwards: “Again Rob [Barff] did a great job to hand the car over with a healthy lead and all  really had to do was to drive it across the line. The Mosler was very fast through the bowl section of the track. He eventually unlapped himself but we managed to take the win. I also want to commend the organisers (DAMC) for allowing us to race despite smaller fields.”

Barff added: “The car was superb and allowed me to build a good margin before I handed over to Leon [Price] who did a good job to bring it home.”

Jonathan Mullan driving a Honda won the Touring Car Invitation – race within a race – from the Moutran brothers second in their Duel Racing Renault with Oliver Grimm taking third and scooping the Cytech Driver of the Day Award for his efforts.

In the UAE Radical Cup it was a good day for the pairing of Tony Wells and James Littlejohn who won both of the 45 minute races in the SR3 Class, with Sean Stevens/Perry Johanssen runner-up in both races.
In the SR8 Class Khaled Al Mudhaf/ Jan Van Meerbeek took top honours in race one with Raeed Hassan/ Bassam Kronfli tops in race two.