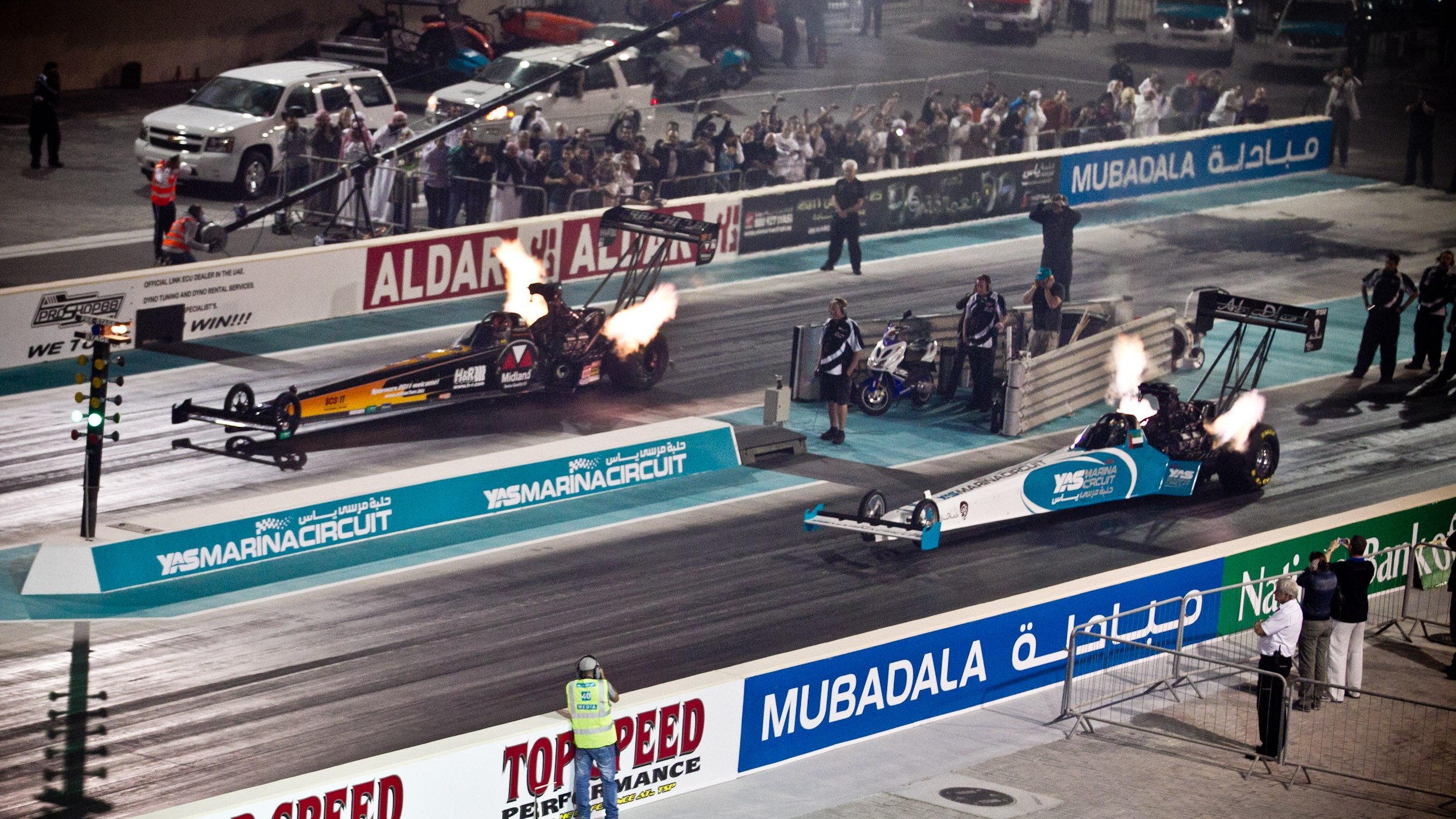 Abu Dhabi, 6 March 2011 – Hot Rod Fuller triumphed over FIA World Champion Urs Erbacher in the battle of the Top Fuel giants at the Yas Drag Racing Festival on Saturday. Fuller beat the Swiss driver in two out of three runs in the elimination round to clinch victory, despite having to abort his final run with engine problems.

Fuller’s best run over the weekend delivered a terminal speed of 507.81 km/h, the highest ever recorded in a UAE drag race and just 4 km/h below the world record for a standing start run over 302 metres (1,000 feet). His best elapsed time of 3.901 seconds was marginally slower than the 3.989 seconds he achieved at the same event last year. “I was delighted to win the Top Fuel class again,” Fuller said. “Urs was a wonderful opponent who overcame a series of mechanical problems and at least one very scary moment when his dragster started to weave at high speed. We both enjoyed enormous support from the crowd and I believe we all delivered a memorable Festival. In our final run of the night we knew we’d already won the Festival, so we tried to take the world terminal speed record too. However, we dialled in just a little too much power and the engine blew – but we’ll be out there again next year for another attempt.” The Top Fuel cars may have been the fastest things on wheels at Yas, but the jet-powered Funny Car of Martin Hill was the star of the show. The crowd was captivated by the unique spectacle of the wedge-shaped car billowing clouds of smoke and eight metres of flame out of the exhaust. Driver Martin Hill fired the afterburner in staccato bursts before each run at the signal of crew chief Richard Henry, so that the jet engine sounded more like a fire-breathing machine gun.

“There are few sights that truly warrant the term ‘awesome’,” said spectator Chris Lejeune from Dubai. “The Drag Festival delivered two of them – the Top Fuel experience and the jet Funny Car. Both of the Top Fuel cars and the Fireforce jet car were truly amazing. I came to last year’s Festival also but this year’s was even better.”

Hill pronounced himself very pleased with the way the car performed on the Yas drag strip, which he acclaimed as “amazing – and as smooth as a billiard table”.

“We took it very easy on our Friday runs to make sure the engine didn’t take out all the glass in the race control tower,” Hill said. “Our performance on Saturday was in line with our expectations. With a few more runs, we could have gone even faster.”

The main limitation on his car’s top speed is the Funny Car body. “In a rail dragster chassis the engine would deliver something in the range of 650 to 725 km/h,” he said. Hill has been driving jet-powered cars since 1982 after he made a switch from racing Kawasaki motorcycles. He now goes on to give a full season of exhibition runs at events across Europe.

Another man with reason to be pleased on Saturday was UAE racer Fadi Tammour, who won his second straight race in the Super Comp 4.80 class. Tammour graduated from the Yas Drag Racing School in January, received his National Hot Rod Association licence from Hot Rod Fuller and went on to win his first two races.

“Fadi has enormous talent,” Fuller said. “His reaction time of 0.004 was just four thousandths of a second off total perfection. To win your first race after gaining your licence is unusual and some might put it down to fluke. To win your second race as well is more than a little bit special.”

Richard Cregan, Chief Executive Officer of Yas Marina Circuit, said he was pleased with the venue’s second annual Drag Racing Festival. “I’d like to thank all the competitors for putting on a spectacular show and all our spectators on both nights who turned out in their thousands to give us their support,” Cregan said.

“It was wonderful to see a strong turnout just a week after Formula Drift brought more than 4,000 people to the circuit. All our efforts are now focused on the opening round of the FIA GT1 World Championship, which takes place at Yas on the 25th and 26th of March.”