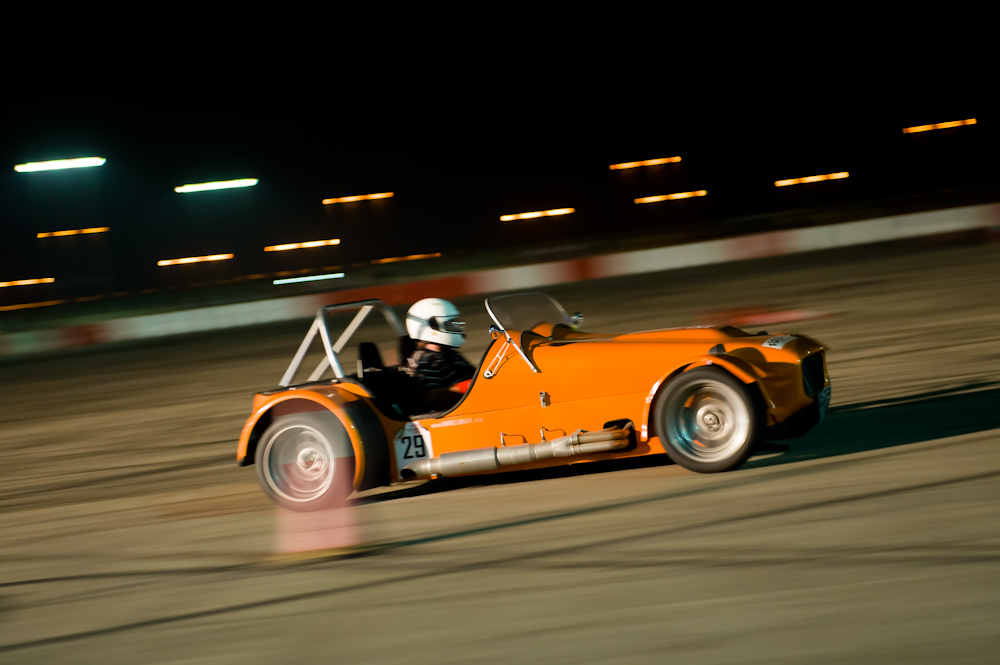 Group A Modified, Raed Himmo, behind the wheel of an Ultralite

Another huge number of competitors took part in racing, which was this weekend divided into five categories. Racing was highlighted by the winning performances of Shaikh Salman bin Isa and Shaikh Saqer in their respective classes. Shaikh Salman bin Isa triumphed in the Group A Stock (4-6 Cylinder 2000 cc and below), while Shaikh Saqer emerged victorious in the Group B Stock (4-6 Cylinder above 2000cc). The three other winners of the night were Raed Himmo in the Group A Modified (up to 2000cc), Hussain Karimi  in the Group B Modified (above 2000cc), and Hussain Alahmadi in the Group C Stock (8 Cylinder and above). Both Himmo and Alahmadi emerged as winners for the second straight weekend.

In the Group A Stock, Shaikh Salman bin Isa, driving his Subaru Impreza, won after completing the race course in 38.737secs. Second place was claimed by Sayed Ali in a Nissan TIIDA, who finished in 41.545secs. Shaikh Saqer steered his Porsche Cayman to the win in 37.436secs.

In the Group B Stock, Shaikh Saqer steered his Porsche Cayman to the win in 37.436secs. Salah Salahuddin was the runner-up in his Mitsubishi Evo X in 38.089secs, and Shaikh Ebrahim Al Khalifa in a Subaru Impreza STI was third in 39.454secs.

In the Group A Modified, Himmo, behind the wheel of an Ultralite, won in 34.254secs. Adel Faraj in a Westfield came second in 35.338secs, while Khalid Al Jamal in a Honda Integra was third in 41.332secs. Finally, in the Group C Stock, Alahmadi secured first place after driving his BMW M5 around the course in a winning mark of 39.097secs. A special award was handed out to woman driver Narmeen, driving her Volkswagen Golf GTI

Meanwhile, a special award was handed out to woman driver Narmeen Abdulwahab, driving her Volkswagen Golf GTI. She was presented a trophy for the second successive week as a token of appreciation for her involvement and competitiveness.

For more information on the Autocross events this Ramadan or on other activities at Bahrain International Circuit, call the circuit hotline on +973-17-450000 or visit the circuit’s official website www.bahraingp.com.

A very satisfying day for the Pole 🇵🇱👏 ... See Less

A new rising prospects that may sort to be unpredictable, it is a good signs that the rookies were having the edge to contend with greater competitiveness. Forget the arguments for these time but Good Luck for the future best results in Alfa Romeo. I'm a Honda fan ⬜💯👍😊🇵🇭

To all the polish fans. Aye its great what he did there but this is testing it really means nothing as u cant tell what other teams programs where and plus u really think he truly be faster than the mercs 😂😂. (Not a merc fan)

shame clarebear must be really upset she let a real f1 driver go for toyboys?! how funny would it be if he gets a seat again next year and destroys williams?

Although I’m happy for him this doesn’t mean anything. We don’t know how anyone was running or what teams were trying to achieve.

He was on soft compound anyway. Others were on c3 and c2, he had the softest.

If only he never had that rallying accident before the 2011 season started, who knows how the last decade would’ve gone for him?

He's still got it!!! #SupportKubica 😊

Running minimal fuel and the C5's which no one else ran (did they?) im not surprised.

It looks like this season Ferrari will be number 2 team for alfa romeo, 🤣

There are some rumors about f2 Vietnam and also bahrain maybe removing from calender cause of covid 19. Are there some news?

Not just for one😎

Robert since was at BMW Williams, was on top... Give him a better engine and will show of what it's capabile...

I think F1 drivers are at the same level and if you put them in the same cars the time difference between 1 and the last would be 0.1-0.2sec

Wish the entire season was this mixed up and not just Mercades up front. Makes it boring.

finally a good amount of laps from ferrari without issues... hope they keep this momentum

Where are these people now who said he is an embarrassement to F1, that he can't drive properly with one hand? Clearly, the car was a problem last year. Even Claire admitted Robert's car behaved unpredictably. And yes I know it's testing and I know he was in quali mode, but his time shows he still has potential.

A nice feel good moment...... I was and still am a fan of his. I'm curious, what were the best lap times last year at the Spanish GP last year?

He was on the better tyres and still only managed a .4 second gap hardly worth worrying about 😂😂

the lap time should be written in the color of the tire used to mark the time, , whether in training or racing...

How many sandbags did Mercedes bring to Barcelona this year??

It’s only testing I know but it’s nice to see him at the top of a chart, he was so fast back in his prime, he really should have been a champion.

Quick enough for P9 in quali last year. Testing times aren't much to go by.

Calling it right now, Kubica gonna be back on the grid in 2021. Wouldnt be suprised if he replaces Kimi

What is happening! I cannot have a clear image of this year's pace

A competitive car is all he needed.. Wish he would have moved to alpha romeo and paired up with Kimi and fought for mid field racing.... P1 at last for Bob... ❤❤❤

Two seconds slower than last weeks fastest time! The next two days will see the teams chasing performance so the times will ramp up.👍

We don't know what the teams setups are. Not saying it's not impressive but he's about a second and a half off last week's fastest.

Kimi fanboy will get triggered after they see Kubica laptime. Good, this is my wet dream to see two most anoying driver fanboy group in F1 to fight

So now all the Polish fans with last years conspiracy theories as to how Russell annihilated their man will claim that this proves that Robert truly is the best driver on the track this year.

good afternoon, any negotiations with television companies to broadcast MotoGP in Brazil?

It sucks to say as a fellow Aussie, but that Tiamatmerduk dudes videos are actually pretty clickbaity and trash. It's still cool to see him there though.