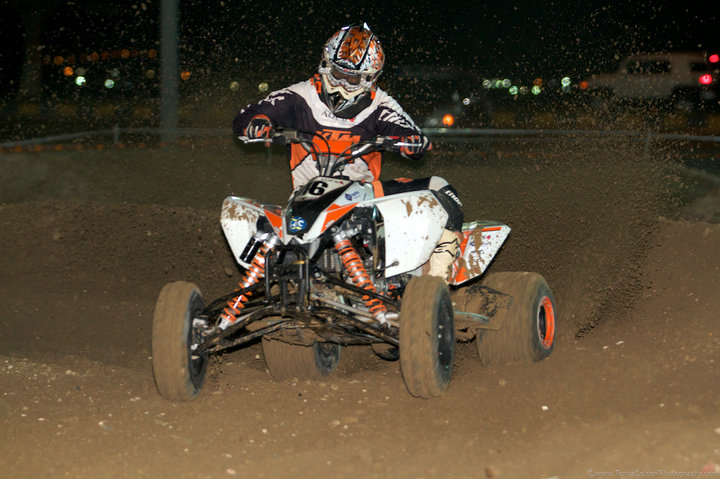 Fujairah: Aug 27th 2010- For the second year during the time of Ramadan, a Supercross event was organized on a purpose built track just on the outskirts of Fujairah city. The events were held at night under floodlights and saw the UAE Motocross scene come out in force. The Maktoum Challenge, held under the Patronage of HH Sheikh Maktoum Bin Hamad Al Sharqi, made its debut in 2008 and is held during the Holy Month of Ramadan where various indoor and outdoor sporting activities ranging from football, cricket, martial arts, badminton and motor sports, provide a competitive platform for sportspersons and source of entertainment for thousands of fans after Iftar. The KTM UAE Racing Team was present with official riders Sam Sunderland, Mark Ackerman and Mohamed Shamsi. Ahmed Ramadan was a guest rider for KTM and put on a great show to come in 2nd overall.

Sam Sunderland took another impressive overall victory and was pleased with the event “its great to see the support from Fujairah towards the Supercross for the second year in a row, I enjoyed riding here and it was great to see so many KTM customers competing as well”.

The KTM UAE ADCB, GAC & Al Shafar sponsored Team hosted and supported all the KTM riders in the event which almost made up half of the field. Team Manager and Managing Partner of KTM UAE was extremely pleased with the amount of KTM bikes participating

“ we are glad to support all KTM riders, it was great to see so many KTM’s on the starting lineup and we will channel our energy for racing events this year even more on customer service. We have come up with a bike and ATV Racing support package for this season which will encourage more people to join the events and grow the sport.”