Dubai: Victory for Przygonski and Balooshi in Dubai International Baja 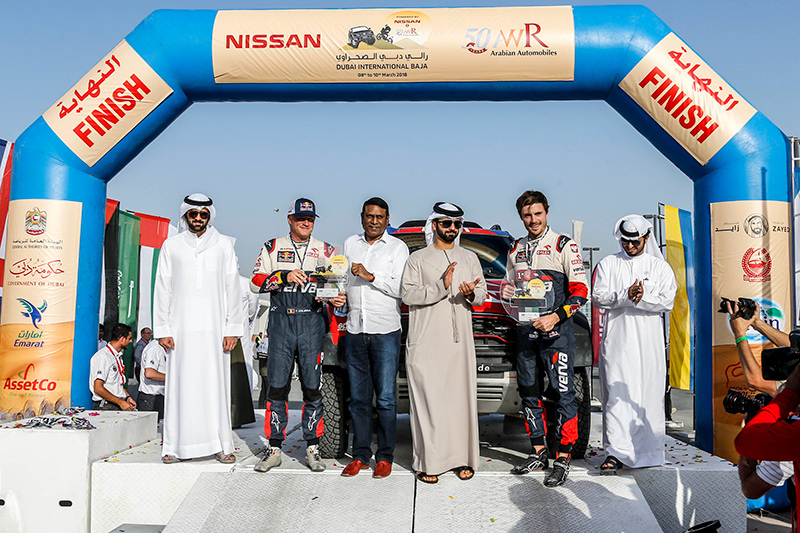 But they were all beaten on the day by the UAE’s Khalid Al Qassimi who forgot the mechanical failure which dropped him from contention 24 hours earlier to set the fastest time on the Nissan stage alongside French co-driver Xavier Panseri in their Peugeot Abu Dhabi Racing Team 3008 DKR.

Fastest today in the bikes, Balooshi powered his KTM to the Dubai Baja crown by 2mins 56 secs from UAE-based French rider Benjamin Melot who finished runner up for the second year in a row, but it was a tense second leg for the Emirati star.

Lying fourth overnight, he benefitted from the retirements of the first leg’s top two, South African Aaron Mare and Kuwait’s Mohammed Jaffar, but had a nervous ride to the finish, unsure whether he had enough fuel to complete the stage. It was a great day all round for Balooshi, as his younger brother Sultan took the third podium place.

Mohammed Ben Sulayem, President of the Automobile and Touring Club for the UAE and Emirates Motor Sport Federation, and FIA Vice President for Sport, said: “This is a young event but it’s already pointing the way forward for rallying in the UAE and the Middle East, and we’re confident that it will go from strength to strength in the years ahead.”

Przygonski, runner up in last year’s FIA World Cup series, completed the Nissan special stage to say: “It was a really good stage. I kept pushing and pushing to stay ahead. The terrain was good, navigation was good. I’m very happy.”

Saudi Seaidan reported: “It was an exciting stage today but it was stressful. I had to constantly battle Vasilyev to make up time against him but I’m extremely happy to come out on top and cross the line before him.”

Completing the top six in the cars category were Czechs Martin Prokop and Jan Tomanek in a Ford F-150 Evo, the UAE’s Mansour Al Helei and Khalid Al Kendi in a Nissan Pick up and UAE-based Thomas Bell and Patrick McMurren in a Nissan Navara.

A relieved Balooshi reached the end of the Nissan stage to say: “I pushed really hard and didn’t give up throughout the last section. I felt there was some mix-up at the refuel with my team-mates, and I went the whole of the second part of the stage not knowing if I had enough fuel.”

Melot said: “It was really fast today. I had problems with the rear brake from early on and gear box problems as well. For the last 30km I was stuck in third gear. I’m happy to finish and happy to be healthy.”

Taking place under the patronage of H.H. Sheikh Hamdan bin Mohammed bin Rashid Al Maktoum, the Crown Prince of Dubai, the Dubai International Baja powered by Nissan and AW Rostamani was supported by the Government of Dubai, Dubai Police, Dubai Municipality and the General Authority of Sports, Al Ain Water, Emarat and AssetCo. The Nissan Patrol is the official car for the event.

The focus of the cross country rally world now switches to the UAE capital for the 28th edition of the Abu Dhabi Desert Challenge POWERED BY NISSAN from 24-29 March. The event is the third round of the FIA World Cup series and first round of the FIM Cross Country Rallies World Championship.