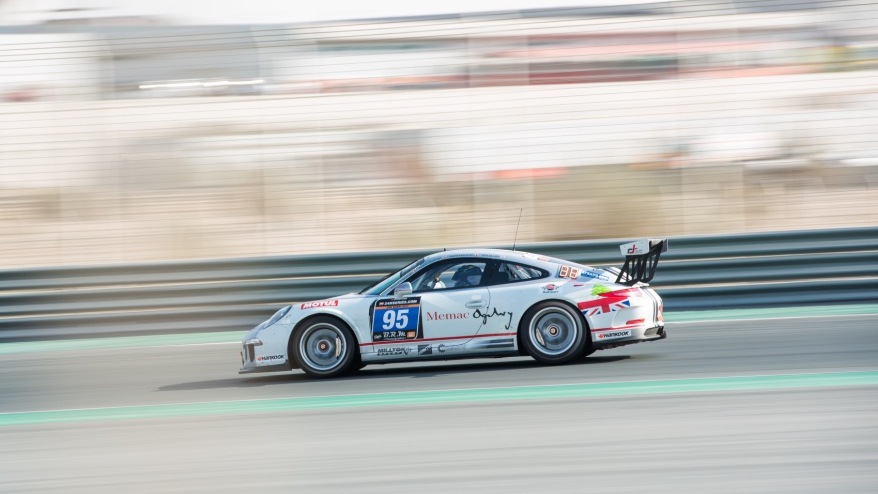 Wed 18th Jan 2017-Phil Quaife was delighted with the performance of the Memac Ogilvy Duel Racing team in their first 24H Series outing of the year at the Dubai 24 Hours, despite being forced to retire while running strongly in the Porsche 991 Cup class.

It was the Kent driver’s tenth Dubai 24H outing, but his first taste of the Porsche 991 Cup car after moving up from the TCR class, where Memac Ogilvy Duel Racing are reigning double-champions.

Quaife was partnered once again by brothers Nabil, Sami and Ramzi Moutran, who were competing in their home event.

During the practice sessions the team got to grips with the car, while concentrating on race setup and tyre management runs.

“It’s a new car and a new challenge for us, which is very exciting,” Quaife said.

“We have been back-to-back champions with the SEAT, so it was awesome to try something different. I started my racing career driving Porsches in the British GT, then the Carrera Cup and Supercup, but this was my first experience of the 991.

“It was important that we got to grips with the car quickly so we could concentrate on the setup for the race.”

Lining up fourth on the grid in the mid-day heat, Quaife took the start and was quickly locked in a close battle for the top-three places in class.

The first of 22 Code 60 periods was issued at the 45-minute mark, allowing the Brit to pit for fuel and remain behind the wheel for a double-stint. He made his way through the order and took the lead, before handing over to Ramzi after two hours.

Quaife then returned to the cockpit for his night stint and continued to battle with the two lead cars, overtaking both before Nabil got on-board the #95 machine during the early hours of the morning.

With just one lap remaining in his stint, another driver reacted to a Code 60 by braking sharply in front of Nabil, who was forced into taking avoiding action which put the team out of the race.

“It was a shame for Nabil and all of us, but we can at least look back on the race and be happy with our pace and competitiveness,” concluded Quaife.

“The team did a fine job in switching their mentality from the SEAT to the Porsche and I’m sure we will continue to fight at the front in the coming races.

“Overall, I was very pleased with my performance. It was fantastic to get back into a GT car and a good one at that! There was some really close racing and I can’t wait to get back out on track again.”