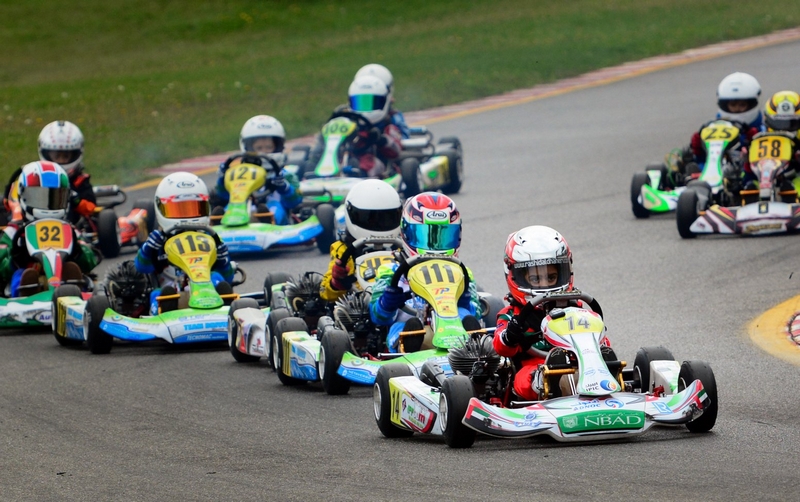 Lining up on a grid of boys between 7 and 10 years of age – wherein he is the youngest and also the only one of two from outside Europe. Al Dhaheri made no mistakes during the weekend in which he covered 250km of driving on track, including pre-race training.

Technical gremlins hampered the seven year old Abu Dhabi schoolboy in qualifying and as a result he would start the Pre-Final from third on the grid.

Race day morning was wet and the track very slippery, nevertheless despite the conditions Al Dhaheri topped the timing sheets with a confident display and thus signaled his intent ahead of the races on the day.

In the Pre-Final, held in dry conditions, Al Dhaheri wasted no time starting from third he managed a good starts and was soon in command of the race. He stayed at the front until the end to notch up his first win of the day.

In the all-important Final, it was business as usual. He again powered off the line to take an early lead, withstood some intense pressure but kept his cool until the chequered flag waved.

It was mission accomplished as he set the fastest lap of the race, banked maximum points with victory and kept his championship ambitions alive despite having missed out on the opening round of the Parolin Academy Championship – at the time of the opening round he was under seven years of age and thus ineligible to compete until round two by which point he had turned seven.

Rashid’s father Ali Al Dhaheri commented: “We are all very happy and satisfied after a tough weekend in which Rashid again excelled. Although he missed the first race of the season he has put himself in contention among the front runners in the Parolin Academy Championship. He is second in the points standings, trailing by 20 points with one round to go.”

“Rashid will be flying the UAE flag here in Italy for the final next month. It is an outside chance but anything can happened in motor racing and we should witness an exciting end to a tough championship where our boy has made his mark,” added Al Dhaheri senior.

Team manager Fausto Ippoliti said: “I am very satisfied with Rashid’s race weekend. I am especially impressed by the way Rashid managed his races, to keep cool under pressure and pull away from the pack.”

“Last but not least I was really amazed by Rashid topping the timing sheets in the warm-up session in wet and slippery conditions. It shows that this young driver is highly talented,” added Ippoliti.

There wasn't a dry eye in the house after Tatsuki Suzuki's victory at Misano! 👏

Watch the dramatic conclusion to the #Moto3 race which saw the Japanese youngster triumph! 🏆

The teams should have at least 10 days of testing. The idea of the new rule change, that decreased the number of testing days to only 6, was to reduce costs and time big teams have for setting up and understanding their car. By doing that, the FIA only hindered smaller teams and their ability to find and solve eventual aero or mechanical deficiencies which led to bigger gaps between teams.

Renting a track for testing is perhaps the cheapest per diem expense in F1. I don’t understand the logic of reducing testing days, it’s certainly not to save money. Just screws the smaller teams and enhances disparity.

Even less room for development, which will translate to more dominance from one team. Dont ask yourselves why we only had three champions in two different teams in the 2010s after the in-season testing bans that took place late last decade. I suspect it wont be any better for next year when they're capped on spending. You might have even heavier dominance from the team that starts off best after the rule changes than you did with Mercedes and Red Bull before them.

They have to put 25% more potential and effort to try to understand the performance of their car and to collect accurate data...Which will definitely make them re schedule their time sheets, and it’s literally a bit of pressure though 🙃😕..Just a thought

Good if it gives us an extra race weekend 👍🏼

The FIA is clearly ran by freaking idiots. They should be able to TEST the cars without garbage limitations. The money being spent already its insane to go this route. Bring back spare cars too. So many great races ruined in turn one because spare cars are banned. Utter stupidity.

The best car the best pilot

Ask Claire Williams, she's got experience with it.

Ban it completely and free practice too. Run what ya brung.🤪

Maybe we can see that on F1 TV Pro with a 25% discount to find that out?

Cars pretty slow if a drone can keep up with it...lol

Williams will be green with envy looking at the drone 😁

Mclaren should change its name to 'Welostalready'.

World drift championship has had this for a few seasons, unbelievable footage!

Glad he’s back, even better news that it’s with Mercedes 👌🏻

Formula E, very different category. But if potential was seen in it, good luck boy