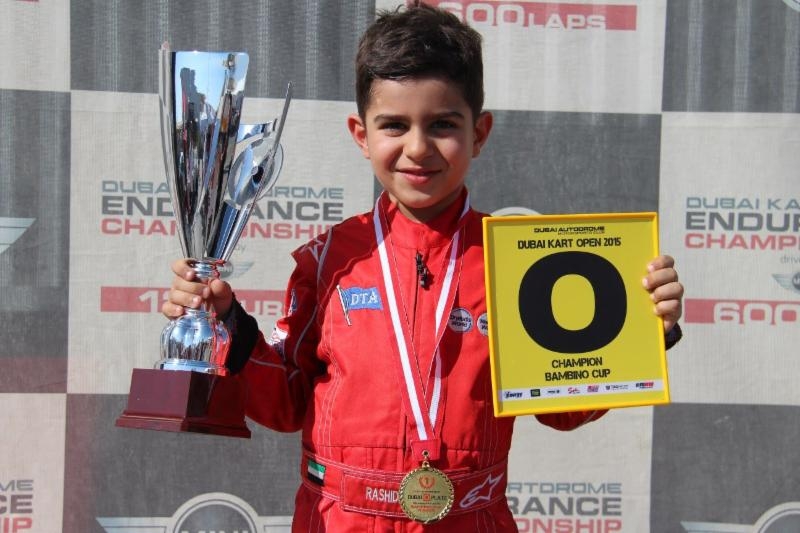 Rashid Al Dhaheri has made a great start to his 2015 season by claiming the prestigious Kartdrome O-Plate title for a second time in two years, and thus setting the stage for an intensive campaign in Italy starting on the weekend of 14 February in Adria.

The six year old Abu Dhabi schoolboy will participate in the 2015 Parolin Academy Championship and when time permits the ROK Cup Championship.

This will provide Rashid with big challenges in this next phase of his karting ‘career’ and part of his natural progression in the sport. The main objectives, set by his minders, for this season is to accumulate experience in Italy driving 60cc karts, facing tough race conditions in big fields, while discovering and mastering new race tracks.

Last year, his first in the highly competitive world of Italian karting, Rashid grew as a race driver as he progressed at an impressive rate and received widespread praise for his exploits from experts in the field.

Rashid likes to say that he is always “full gas” and this was also the case during the off-season. He underwent a regular development programme, working on his stamina through long sessions of practice at the wheel of his Parolin Micro Max. He drove around 1500 km mostly at Dubai Kartdrome and Al Forsan race tracks.

He also travelled to Europe to do winter training – experiencing rain and cold conditions – completing an estimated 800 km at Lonato, Lignano and Adria race tracks.

Most recently he took part in the O-Plate Race Day at the Dubai Kartdrome where he topped the Bambino Time Trials and took home his first trophy of the 2015 season.

Of the season ahead, his father Ali Al Dhaheri is quietly confident but accepts that things will not be any easier: “The nature of Rashid is to constantly improve his driving and this I am sure will continue. Remaining at the top will be the big challenge as this season he will face older rivals, with more experience.”

“The aim is to keep him focused, to work on his technique and develop race craft and extract the maximum every time he is out on track. He has already demonstrated to everybody that talent has no age boundaries. And as long as he is happy and enjoying himself then it is mission accomplished,” added Al Dhaheri senior.

That should be a sport! Drones racing around an F1 circuit. Did you see that cornering?

How is this drone keeping up with the speed of a F1 car?! 😮🧐

After his atrocious seasons with McLaren? Surprised. The only glimmer of promise came, ironically, in his last F1 race.

The first-ever MENA Karting Championship Nations Cup, held this past weekend at Muscat Speedway in Oman, was a huge success and laid the template for future such events, not only for the Middle East but karting globally. The initiative - led by the Oman Automobile Association with backing from the FIA Sport Grant Programme and support from Abu Dhabi Sports Council and Al Ain Raceway - was unique in that it counted towards two championships as drivers of MENA nationality raced for the Nations Cup with their counterparts from the UAE Rotax Max Challenge (RMC) in Micro MAX, Mini MAX, Junior MAX, Senior MAX, DD2, RD1 ELITE Sprint and Endurance. [ 954 more words ]
circuitprodigital.com/2020/02/17/oman-inaugural-mena-karting-championship-nations-cup-and-uae-rmc... ... See Less