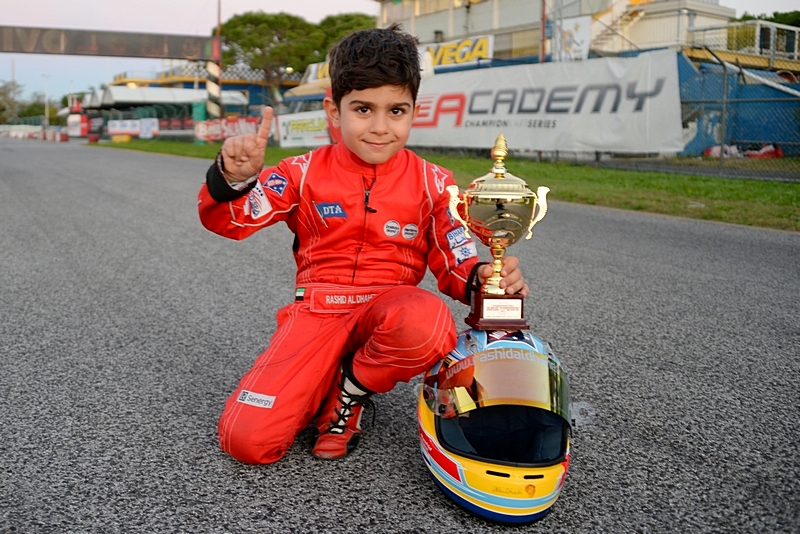 The Italian job – complete with more silverware for young Rashid

JESOLO, ITALY, 28 OCTOBER 2014 – Rashid Al Dhaheri completed his 2014 season of karting in Italy with a successful weekend of competition during the the Academy Champion Kart Series International Grand Finals at Pista Azzura di Jesolo near Venice.

The six year old Abu Dhabi based schoolboy, rose to the challenges of the tight and technical track not far from the Adriatic coast, He was instantly on the pace from the moment practice began on Friday, and during the next two days set himself as the one to beat in the Baby Pre-Agonistica category for 6 to 8 year old drivers.

On the day of the Finals (Sunday) Al Dhaheri carried the UAE flag, as over 100 drivers from around the world took part in the official parade at the Pista Azzura. Since its opening in 1962 the venue has played host to some of the sport’s legends during their karting years on the journey to Formula 1, including the likes Ayrton Senna, Alain Prost, Riccardo Patrese, Michael Schumacher, Giancarlo Fisichella, Robert Kubica and Lewis Hamilton to name a few.

On race day, grid order was decided randomly with the UAE’s Little Alonso starting race one from the back of the grid in 17th. However this this did not deter him, but rather fired the youngster up, as he powered through the field. By mid-distance he was in second and chasing down the leader Christian Bertuca who had managed to edge out a useful lead, but in the end despite closing in at about a second a lap Al Dhaheri to settle for the runner-up spot by less than quarter of a second.

In Race 2, Al Dhaheri started from pole and from the moment the field was unleashed he seized the lead where he stayed until the end to claim a well controlled victory, ahead of his Ippoliti Racing teammate Valerio Rinicella who chased hard in second place.

Speaking at the end of three intense days, team manager Fausto Ippoliti said, “In his category Rashid was the boy to beat all weekend long. He improved with every session and most importantly he listened to his coach and mechanics. Delivering what he had to do and this is a great way for him and the team to end the season in Italy. He definitely made a name for himself here in junior karting and for us it is a pleasure to be part of his karting programme.”

Al Dhaheri returns to Abu Dhabi and is set to have a break before partaking in select UAE championship races, while a programme of kart racing is planned for the 2015 season.

There wasn't a dry eye in the house after Tatsuki Suzuki's victory at Misano! 👏

Watch the dramatic conclusion to the #Moto3 race which saw the Japanese youngster triumph! 🏆

The teams should have at least 10 days of testing. The idea of the new rule change, that decreased the number of testing days to only 6, was to reduce costs and time big teams have for setting up and understanding their car. By doing that, the FIA only hindered smaller teams and their ability to find and solve eventual aero or mechanical deficiencies which led to bigger gaps between teams.

Renting a track for testing is perhaps the cheapest per diem expense in F1. I don’t understand the logic of reducing testing days, it’s certainly not to save money. Just screws the smaller teams and enhances disparity.

Even less room for development, which will translate to more dominance from one team. Dont ask yourselves why we only had three champions in two different teams in the 2010s after the in-season testing bans that took place late last decade. I suspect it wont be any better for next year when they're capped on spending. You might have even heavier dominance from the team that starts off best after the rule changes than you did with Mercedes and Red Bull before them.

They have to put 25% more potential and effort to try to understand the performance of their car and to collect accurate data...Which will definitely make them re schedule their time sheets, and it’s literally a bit of pressure though 🙃😕..Just a thought

Good if it gives us an extra race weekend 👍🏼

The FIA is clearly ran by freaking idiots. They should be able to TEST the cars without garbage limitations. The money being spent already its insane to go this route. Bring back spare cars too. So many great races ruined in turn one because spare cars are banned. Utter stupidity.

The best car the best pilot

Ask Claire Williams, she's got experience with it.

Ban it completely and free practice too. Run what ya brung.🤪

Maybe we can see that on F1 TV Pro with a 25% discount to find that out?

Cars pretty slow if a drone can keep up with it...lol

Williams will be green with envy looking at the drone 😁

Mclaren should change its name to 'Welostalready'.

World drift championship has had this for a few seasons, unbelievable footage!

Glad he’s back, even better news that it’s with Mercedes 👌🏻

Formula E, very different category. But if potential was seen in it, good luck boy